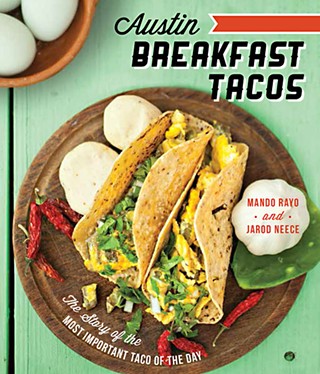 Austin Breakfast Tacos: The Story of the Most Important Taco of the Day


Back in the days before Yelp and Twitter, a group of intrepid Austin taco lovers dedicated themselves to sharing their passion for and research about the distinctive variety of breakfast tacos available in our fair city. The wildly popular blog Taco Journalism (www.tacojournalism.blogspot.com) was started in 2006, becoming a must-read for locals and taco-curious visitors alike. "The blog has always been a labor of love," recalls one of the bloggers, South by Southwest Film Festival senior programmer Jarod Neece. "We've never had ads on the site or taken free meals – it was always just about how much we love tacos. We always thought if we kept doing it that way, something good would happen." Something good did happen when the History Press came calling, looking for a book about tacos for the publisher's American Palate series. Taco Journalism bloggers Neece and Mando Rayo, a Latino engagement strategist, signed on, and their book, Austin Breakfast Tacos, arrives in stores this week. It is the second local book from the American Palate series to debut this year; The Austin Food Blogger Alliance Cookbook was published in the spring.

If you're familiar with the blog, the book is written in much the same style: casual, fun, and approachable, with some Spanglish here and there for seasoning. The authors include some interesting history of early Mexican street food vendors and restaurants and definitely pay respect to "Los Elders," the East Austin Mexican restaurateurs who they deem responsible for making Austin the taco mecca we know and love. Because tacos are basically a simple dish borne of and for convenience, the recipes featured in the book are really more lists of ingredients and suggestions. In addition to interviews with the founding taco fathers and mothers, the authors also chatted with local culinary celebrities such as Paul Qui and Aaron Franklin about their favorite taco preparations. I'm betting Austin Breakfast Tacos becomes one of Austin's favorite culinary mementos during the coming year.

Celebrate the debut of Austin Breakfast Tacos and buy a copy signed by the authors at a book launch party at Tamale House East (1707 E. Sixth) on Saturday, July 20 from 5-7pm.