A multifaceted diamond tucked away in the suburbs 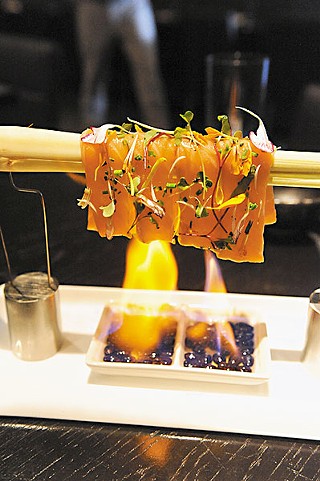 For a restaurant tucked into a strip mall between a Hancock Fabrics and a Party City, Soto has a very cosmopolitan interior. The color palette is all shades of black and gray, with napkins and flower blossoms providing bird-of-paradise touches of color. The lines are sleek, and the repetition of rectangular shapes is harmonious and unifying. The effect is reminiscent of the black and white of classic masculine dinner attire, functioning to accent the vivid plumage of the ladies' gowns. Soto's deliberately neutral decor plays up the vibrant tones of the Japanese cuisine: the rosy pink salmon, clear red tuna, and coral roe.

Though Soto is certainly elegant, that is not required of the customer, nor is it necessary to drop a truckload of bills to eat there. The menu displays a wide range of prices, from affordable to decadent. Soto successfully carries off the sleight of hand of being two eateries at once: a solid neighborhood spot for regulars looking for an aromatic noodle bowl and panfried dumplings, while also perfectly suited to be the spendy, special-occasion destination with signature cocktails, first-rate sashimi, and impressive specials.

The key to Soto's success at offering such a wide range of cuisine lies in their kitchen, where two generations of the Okamoto family work side by side. Soto is, above everything else, a family business. The Okamoto family has been in the restaurant business in Japan for generations, and boasts a well-known Japanese chef, Chef Ke Okamoto, in Kyoto. Chef Andy Okamoto of Soto trained with his uncle in Kyoto for four years before apprenticing at the famous Philadelphia restaurant Morimoto. Chef Andy went on to work at a series of restaurants in Boston before relocating here to Austin. He and his wife brought along his parents and a brother, all of whom work in the Soto kitchen. Chef Andy's mother, Lin Okamoto, and father, Keh Okamoto, take care of the noodle bowl, tempura, and hot entrée side of Soto's menu, which explains why the "home-cooking" portion is so very solid. Who is going to rule homestyle cooking better than your mom and dad? Brother Ke Okamoto (named after his uncle) is Soto's dessert chef and practically deserves a review of his own. His innovative desserts are really a hybrid of Japanese flavors and Continental techniques that are far more successful than most Japanese places offer. Chef Andy's wife Sharon sees to the running of the place, while Chef Andy himself does the all-important job of manning the sushi bar and creating the specials.

The sushi and sashimi are exceptional, as might be expected from a chef with such an international background. All of the maki are served at room temperature, which does make such a difference in flavor. The sushi rice is above reproach – tender, light, lightly sticky, and perfumed with an ephemeral touch of rice wine. The few sauces are made to order from the freshest citrus and oils. Though everything at Soto is excellent, the sushi stands out and lingers in the memory. Chef Andy even brings a certain magic to the soft-shell crab roll ($14) and tiger maki ($9), with his deft professionalism and fine ingredients.

Like many of Austin's better sushi restaurants, Soto has fish flown in from the Sea of Japan twice weekly. "When the fish box arrives," says Soto manager Brian O'Neill, "it's like maritime Christmas. Not until the box of fish arrives does Chef Andy begin to dream up his specials." The specials recently have included Fire Salmon ($28): strips of wild-caught, sashimi-grade salmon, suspended on a skewer and lightly seared by the fire of coffee-infused brandy (lit, of course, at your table), and Mango Kobe ($22): slices of perfectly ripe mango topped with meltingly tender slices of barely seared Kobe beef, adorned with flakes of gold leaf.

Moving on to the home cooking: The Black Pork Gyoza ($6) are a phenomenal deal. Fresh and delicious, the seasoned pork is studded with crisp green onion, and the dumplings themselves are panfried to perfection. The ample portion of Panko-crusted pork cutlet in the katsu entrée ($15) was crisp, tender, and satisfying, easily the best katsu I have had in town. The grilled salmon with teriyaki ($15) was beautifully seared over charcoal and served with tender-crisp marinated broccoli. The Tonkotsu ($13), or pork bone noodle soup, was aromatic and substantial, with tender Chinese cabbage and floating slices of pork tenderloin. These affordable menu items clearly do not suffer from lack of attention in the kitchen.

The Green Tea Tiramisu ($7) was superbly original. Creamy and delightfully light, it featured the soft flavor of matcha blended with white wine and fresh cream. The Red Bean Crème Brûlée ($7), served with a ball of red bean ice cream, sported a layer of red bean custard topped with the more traditional crème brûlée in a flavor combination that was entirely successful.

Soto is clearly an undiscovered gem. For once, Austinites will be motoring out to Cedar Park for a special dining experience, rather than the other way around.