When Jeffrey Lorien launched Zhi Tea six years ago, he expected sales to naturally decline over the summer months, believing most people consider tea a cold-weather beverage. So he was initially surprised when sales remained steady throughout the summer, and even increased. Lorien realized he had under-estimated the Texan love affair with iced tea. No more! Lorien estimates that iced tea accounts for at least half of his tea summer sales. This year, Zhi manager Jessica Evans has developed four new teas blended specifically for drinking iced, one for each of the hottest months.

May's tea was Tropical Green, a green tea with notes of pineapple, papaya, and citrus. Blended specifically for "sun tea" and cold brewing, Tropical Green comes in tins of four 1-ounce tea bags, each one designed to make a whole pitcher of iced tea. "Each tin sells for $8, so it comes out to $2 a pitcher, or about 25¢ a glass," says Evans. June's tea is Violet Femme, a vanilla- and lavender-infused Earl Grey. "The flavors of vanilla and lavender soften the bergamot, creating a more complex profile," Evans explains. "Iced, it is irresistible!" Violet Femme is sold loose, in Zhi's regular 4-ounce tins ($18.95).

July's tea will be Summer Strawberry, a caffeine-free, green rooibos blend, with tart strawberry and healthful organic bilberry. August will unveil Pink Lemonade Tea, another caffeine-free blend, featuring organic lemon myrtle, rose hips, and hibiscus. "It needs no sweetener," says Lorien. "It is naturally sweet, tart, and refreshing, like a perfect lemonade." Although Summer Strawberry and Pink Lemonade won't be available until July and August, respectively, both can be sampled at the Zhi retail store and cafe in East Austin. (Zhi Tea is also available for purchase online and at many Austin coffee shops and restaurants.)

"We have had a lot of requests for a bilberry tea," says Lorien. "Bilberry has notable amounts of antioxidants, as well as antibacterial and antifungal properties. For the entire summer series of teas, we wanted to 'marry' what people think of as healthful and what they think of as indulgent." 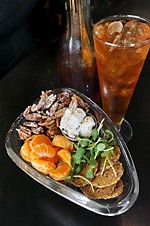