John Harris grew up in Houston and went to college at the University of Texas in the Seventies. During his career in tech, he helped create a clever website (eFax) that allowed all of us to tank our fax machines. Hallelujah. Harris started Amici Cellars along with a few friends 20 years ago. They decided to keep the winery small and make the best wines they could, focusing on red wines in the $30-$50 range. My favorite was, and still is, their perfectly balanced Monterey Pinot Noir ($30). In 2009, they had the chance to bring on a new partner, one of California's most famous winemakers, Joel Aiken. Aiken had spent the prior 27 years sourcing grapes and making wines for Beaulieu Vineyard, including their ultra-famous Georges de Latour. Of course, having a new winemaker who had dealt with the wide-ranging Beaulieu's catalog was a boon. But even more important was Aiken's encyclopedic knowledge of where the best little off-the-map vineyards were and how to find the often reclusive farmers who owned them. Suddenly, opportunities opened on both ends of the financial scale. Aiken found two spectacular Cabernet vineyards which have yielded wines going for as much as $125 a bottle, but he also knew where the best underpriced gems were hidden.

So now we have wines made by the talented team for less than $20. The team aims for purity and avoids oakiness or big buttery flavors. Their No Curfew red wine ($17) is a blend of Zinfandel, Syrah, and Petite Sirah. As you might guess, it is a dark wine with sufficient tannic grip, but it is also soft enough to be a pleasant quaffing wine for a night on the patio. Serve it with grilled meat, especially a burger or a steak. Their other wine under $20 that I recommend is Olema Chardonnay ($15), which tastes like Chablis made in California – namely, just the pure lovely tastes and aromas of Chardonnay. This wine is impeccable with raw oysters. Olema Chardonnay is available at the King Liquor on Southwest Parkway and at several restaurants. No Curfew is available at several Twin Liquors and at Central Market. To learn more about John Harris and his winery, watch our interview at austinchronicle.com/blogs/food.

Wine of the Week
An embarrassment of riches: great red wines under $12 a bottle 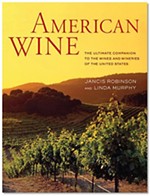 American Wine: The Ultimate Companion to the Wines and Wineries of the United States
This book on American wine is accurate, insightful, and on target