Restaurant Review: The Lazarus of Barbecue Rises in East Austin

Mercurial John Mueller is back at the top of his game 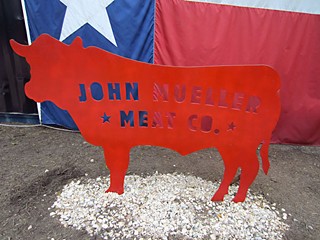 After the much ballyhooed forced departure of John Mueller from his own barbecue business over on South First last fall, there was great consternation and gnashing of teeth by local, state, and even national barbecue cognoscenti. The Yoda of beef ribs was no longer manning a pit, and tortured withdrawal quickly set in. Rumors of reopening at assorted locations swirled all during the winter, until John Mueller unlocked his gate as John Mueller Meat Co. on Feb. 23 this spring. He is situated behind Kellee's Place, which sits on the northeast corner of East Sixth and Pedernales. A six-foot chain-link fence covered with a green nylon screen encloses a big area covered in decomposed granite, with a black and white trailer that dispenses the food, and a separate, screened-in, 12-foot, tank-style smoker. A huge tent covers seven 10-seat picnic tables, and you enter from the alley. Apart from the street construction going on at the corner, it's a tranquil area one block from the end of East Sixth. On the west side of the service trailer sit bottled drinks, iced-down in a galvanized trough, and all of the condiments.

Mueller works at the pit, cooking the meats and wrapping them in butcher paper, while the staff slices and dishes out at the service window (brisket, beef and pork ribs, and turkey are $6.99 per half-pound; sausage is $9.98 per pound). It gives Mueller a great vantage point to watch customer reaction and mingle with the regulars. He's mellowed somewhat since those turbulent early days, and the barbecue "cook" – his term, not mine; my term would indicate a more elevated degree of mastery – who held a reputation as the "barbecue Nazi," has become almost gracious at his new digs. I ordered some of everything (no pulled pork that day) and was tickled pink that I did.

The brisket slices (I requested fatty, from the point) were as amazing as ever. A thick, caramelized crust of smoky spice covers a thin smoke ring, fading into moist and beefy meat barely held together by melting collagen. When you hold one end of a slice and pull, it looks like the flexing bellows of an accordion. This brisket might surpass Tootsie's of Snow's and Aaron's of Franklin; it is that good. Nobody does beef short ribs as good as John Mueller. Mine was a 4- by 6-inch chunk of unctuous rib meat barely clinging to an 8-inch smoke-stained bone. There were sugar cookies of caramelized fat hanging onto the edge of a crusty bark, and the meat underneath literally melted in your mouth. This is the beef rib lesser joints aspire to.

The handmade sausage is superb: A taut and snappy casing yields to a moist (but not the least bit greasy), coarse-ground filling packed with flavor, smoke, and heat. I could eat a huge mess of this sausage before tiring out. Turkey, which is usually a throwaway dish for the beef-avoiders, is meltingly moist and coated with Mueller's signature bark. The pork ribs rivaled the quality of the short ribs. Tender and meaty, they taste like they have had a slight brush of glaze that only adds to the sweet and smoky heat of the caramel exterior. The porky meat has that perfect balance on the cusp of resistance, almost pulling off the bone. Barbecue judges snap to when they find ribs like this. Sides ($1.99) are real plate contenders also. The baked squash is more like squash con queso, but in a very good, sinful way. The beans are rich and creamy, highly spiced and fatty. The potato salad is mustardy, straddling the line between chunky and smooth. John's sauce is perfect, managing to blend vinegar, spice, onion, tomato, and sweet into a flavor that manages to complement and enhance all it touches.

Fanatics of mercurial Mueller's craft live in fear that he will fold again, but this newest endeavor looks and feels very permanent to me. The barbecue is fantastic; the setup is relaxed, comfy, and well-executed; and most of all, Mueller is at the very top of his game.