Has Dirty Sixth cleaned up its act? 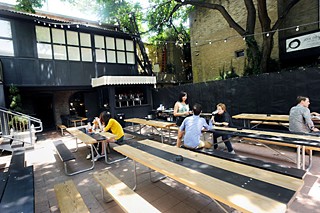 I asked the associate director of the Down­town Austin Alliance, an Austin resident for 23 years, what "Dirty Sixth" means and whether it's cleaning up, but Molly Alexander only knows it as East Sixth, Old Pecan Street, and "the oldest street in Texas."

"I just recently heard it called Dirty Sixth in the past two or three years – only in the media. Just reporters use it," Alexander gibes.

This reporter then took a pedicab to Sixth Street to investigate. I was about to ask my pedicab driver whether he'd ever heard of Dirty Sixth and, if it exists, whether he'd be dropping me off there. Then he turned up Trinity toward Sixth, we both held our breath from the waste-laden wind, and the question pretty much answered itself.

Though technically the Downtown strip is on East Sixth, that term – East Sixth – has become shorthand for the more laid-back, locals-friendly neighborhood east of I-35 that exploded in the Aughties. "Dirty Sixth" – famous for shot bars, tourists, and stumbling-drunk undergrads – sits west of the highway, and it's currently undergoing a renaissance of its own.

Whether or not you buy into the "dirty" hype, Easy Tiger (709 E. Sixth), with its ebullient national rankings for beer and food, would count among the waves washing it clean. The ELM Restaurant Group, which also created 24 Diner (600 N. Lamar), bought the space on East Sixth three years ago and opened Easy Tiger in 2012.

"Those bushes that we cleared out by the building were loaded with shit – literally and figuratively," says Drew Curren, chef and ELM partner. "For the first several months, we had to call 911 two to three times a day." They called for situations ranging from theft to homeless people using the beer garden's Ping-Pong area as a free, amenity-less hostel. Scott Hentschel, also a partner of ELM, wouldn't consider the location when Linda Asaf, a recruiter for Downtown Austin Alli­ance, approached him while eating at 24 Diner in 2010. "We said, no, we don't even have to get off our barstool," Hentschel recalls. He hadn't had occasion to go to "that" side of Sixth in over 20 years. Asaf persisted and convinced them to take a look. "It was the strongest odor of urine possible," says Hentschel. "It was dark, dirty, and dingy."

Still, the ELM partners couldn't stop thinking of the potential to combine their bakery and beer garden concepts into a single space. Ultimately, ignoring the warnings of their friends, families, and business advisors, ELM Restaurant Group stopped hunting for space in East Austin and joined the ranks of other adventurous restaurateurs, like Shawn Cirkiel of 5-star restaurant parkside (301 E. Sixth). The Easy Tiger bakery operates at all hours, and its light shines like a beacon in a sea of well vodka. "This is hot property again," says Hentschel. "We got in here just in time."

Cirkiel admits that there are still challenges to the Downtown revitalization – the homeless population, for instance – "but Congress Avenue has those same challenges."

"At 2am, it doesn't look any different from the rest of town," Cirkiel continues. In fact, he points out, "Sixth is the only entertainment district that cleans itself." Nearly every night, the city of Austin sends trucks to sweep the food wrappers and wash the alleys.

The characterization of "the tightest concentration of Victorian buildings east of the Mississippi" as unclean is cyclical, he thinks. According to one of Cirkiel's regular customers, in the 1950s the mischief of choice for young men at the University of Texas was patronizing whorehouses on Sixth Street. "In five years," Cirkiel predicts, "we're going to be talking about how Sixth Street has valet parking everywhere."

In 2001, a violent clash between police and Mardi Gras revelers on Sixth made national news and led swiftly to routine police barricades on the storied street. Ironically, Cirkiel notes, "by closing the streets, it makes it seem like a party atmosphere which makes people do things that aren't appropriate anywhere else."

Tim League, head of the Alamo Draft­house movie theatre franchise and board member of Preservation Austin, has bought "superdistressed properties," including Midnight Cowboy Oriental Massage, a brothel shut down by police in 2011. He converted it into a craft cocktail speakeasy and dropped "Oriental Massage" from the name (and the menu of services). He has also moved Alamo Drafthouse's offices to the street and returned the Ritz to its original purpose as a movie palace. 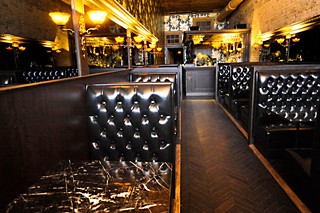 "I'd like to see it be a more diverse entertainment district," League says. "The folks that I think are doing the best job in making sure that we're turning around Sixth are the ones who know about the history and care about it."

DAA Associate Director Molly Alexander first approached League about buying the Ritz. The theatre's fortunes mirrored the history of the rest of the street. Opened in 1929, it was the first theatre in town built specifically for "talkies." All sorts of taboos were under fire here merely decades after the Capitol was finished. In a time of segregation, many of the street's merchants were black or immigrants from Lebanon, Israel, Greece, and China. The theatre owner L.L. Hegman and his wife were often arrested for playing movies on Sundays in scandalous violation of Blue Laws.

Though the Hegman family retained ownership of the building, the theatre closed in 1964, as many Downtown businesses did when suburbs started developing. It briefly reopened as an adult theatre in 1970, when much of the street was vacant. Esther's Follies brought punk music acts there in the Eighties when live music started putting Sixth Street on the tourist map. The Ritz then operated as a bar until 2005.

Reborn in 2007 as the smallest Drafthouse, with only two screens, showings now regularly sell out. "Probably not the most short-term viable commercial move, but I wasn't thinking short term," League says of his decision to put his film, food, and beer concept in a historic building. "I was thinking forever. If you build something based on quality, you can last longer than slapping up a neon sign and selling cheap drinks."

Alexander, with a career in economic development as background, sees the history of Sixth in terms of entrepreneurs trying new concepts. She constantly asks herself, "How do you take it to the next generation?"

The next generation of Austin has relocated here from all over America, and many bring big city sensibilities with them. "If people don't bring in cool bars, people will just go elsewhere. We can't just put up something," said Willie Stark of HandleBar (121 E. Fifth), where Firkin Fridays and Lone Star tall boys coexist harmoniously.

"At my last job [here on Sixth]," says Brett Vance, Stark's business partner, "I suggested to the manager that local beers were hot, and we got into an argument. He told me that I would never run a successful bar, because I didn't know trends." That was a year and a half ago.

Since then, Chicago House (607 Trinity), a craft beer bar by ATX Brands, opened in place of the old Yassine-owned property Fuel. The HandleBar guys are opening a pub concept, Scapegoat, in the former Logan's on Sixth (200 E. Sixth), and Gatsby, a craft cocktail bar, is working to open in the historic building across the street from Easy Tiger.

"I try not to call it 'Dirty' anymore now that I'm in the position I'm in," says Stark. He came to Austin in 2005 to attend Texas State, and presumably cared less about the reputation of the street as a student. Like Sixth, he's evolved.

It's possible that in the future, "Dynamic Sixth" would be a more accurate nickname – but only reporters would use it. As Bars Go Wild, Austin Prepares for Inevitable Second Wave
Miss the coronavirus? It'll be back!