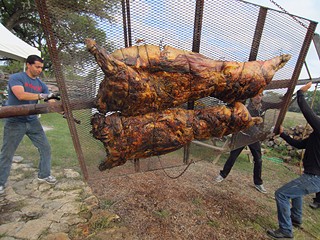 As the sun rose over the oak-tree-lined grassy meadow at Bridges Ranch, I pulled up to find Lou Lambert's team hard at work and looking a touch ragged. They had been cooking a 1,000-pound steer (735-pound dressed-out and butterflied) since 4pm the previous afternoon, and it had been a long night, fueled by more than a few beers and who knows what else. The light of dawn ushered in a renewal of energy for the punch-drunk and exhausted boys; the end was in sight, although they still had a ways to go.

The event was the second annual Vaca y Vino, a benefit for the Farm and Ranch Freedom Alliance (FARFA), a national organization that supports independent ranchers and farmers in promoting a healthy food supply for American diners. The idea for the event stemmed from one of the grilling methods detailed in Argentine chef and culinary trendmaker Francis Mallmann's award-winning cookbook, Seven Fires: Grilling the Argentine Way (Artisan). Mallmann himself demonstrated the vaca entera or "entire cow" style of cooking during an appearance at Central Market's Passport Argentina a few years back, and local chefs have been keen on the technique ever since. Chef-owners Larry McGuire and Lou Lambert put their heads together with Lamberts' founding partner (and third generation rancher) Will Bridges and planned the first round last year. It was a natural match, since the Bridges Ranch – a 1,000-acre, pristine, and historic working cattle ranch halfway between Driftwood and Wimberley – is being promoted as a destination party venue for their restaurant group, and cooking meat is a passion for the Lamberts' folks.

To handle heavy slabs of meat meant that a seriously engineered contraption had to be welded together that would allow the cooking surface to be raised, lowered, and rotated to cook both sides evenly and that would also allow the grill to be swung away from the fire so that the beef could be tended to away from the searing heat. Bridges' father, Dr. Robert Bridges, visualized the design, and Ted Jeter at Spillar Custom Hitches engineered and welded it; they concocted a massive thing of beauty that functions perfectly. "Each run-through and cooking session leads to more tweaking and refinement," said Lambert. 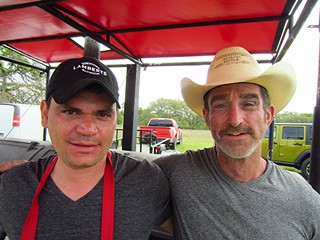 I arrived just in time for one of the seamless flips of the beef sides on the grill. "This is some beautifully marbled meat," said Lambert. "We got it from Jason Peeler at Texana Feeders in Floresville, and all of his cattle grade out between prime and high-choice grade. It's an Angus that was probably over 1,000 pounds before dressing out to 735 pounds. This year we're covering the sides with coffee bags soaked in brine instead of mopping it like we did last year, and it's working a lot better; the bags hold in the heat better and keep the meat basted. Live and learn."

Lean and muscled in his well-worn cowboy hat, Lambert said, "I love cooking like this. The food tastes a lot better outside, and it's a lot more fun to cook." That love is reinforced by the Big City Camp Cooking classes he holds at sister Liz Lambert's El Cosmico out in Marfa, an art space-motel of restored vintage travel trailers and teepees. Lambert periodically hosts weekend groups of up to 24 to learn all about campfire, camp stove, and Dutch oven West Texas cooking. "We cover every aspect, from backyard cooking to in-the-wild. They learn how to plan a menu, organize, break down meat, prep and pack, build a fire, grill and smoke – the whole bit. It's got great food, live music, stargazing. Folks love it, and if you're worried about the heat in August, Marfa is the coolest spot in the state that time of year." After the success of last year's Big Ranch, Big City Cookbook: Recipes From Lambert's Texas Kitchens (Ten Speed Press), Lambert has a new cookbook in the works for his publisher, and he and partner James Smith anticipate relocating back to Austin later this year. He's also working on a couple of new projects with his sister Liz: "I'll be 55 this summer, and the goal was to slow down and travel more, but new interesting stuff keeps popping up. We'll see."

Of course, the backdrop of this entire event is the imminent re-opening of Jeffrey's. The McGuire Moorman Hos­pi­tal­i­ty group (Lamberts, Perla's, Clark's Oyster Bar, Elizabeth Street Cafe, Fresa's Chicken al Carbon, Josephine House, Bridges Ranch) took over the West Austin neighborhood landmark last year, and the long project is definitely now in the home stretch, with Lambert helping out with the final push. In an impressive display of multi­tasking, several of the Jeffrey's kitchen and sommelier staff were helping at Vaca y Vino and were pumped about the new market-driven menu, with excitement and praise for the design and remodeling of the space. By press time, Jeffrey's soft opening will be underway.

Zach Davis of Lamberts was riding herd on the kitchen staff here like a buckle-winning calf roper, with all food staff and stations on-point and organized. Scarlet-hued James Smith, master fire tender, performed the Sisyphean task of keeping three fire barrels filled with coals for 24 hours straight and being Lambert's right-hand man at the pit. After several more flips of the beef and a two-hour resting for the meat to relax and get juicy, the food was coming into sharp focus. "We're shooting for about 180°F on the haunch and 140°F on the center loins. All bets are off with chunks this big, though; we'll just have to cut and see," said Lambert. Davis had fired up a huge smoker on wheels to cook 100 pounds of their pork and beef-jalapeño sausage, as well as a pile of New York strip loins and rib-eye rolls to be served with the vaca entera. Burners were set up for serving soup and cooking potatoes, with another grill for red onions and lettuce. By noon, event manager Fallon Gaskamp had the server staff polished to a gleaming shine, and Steven Ridge had the event's drinks staff ready to go. Doug Strahan & the Good Neighbors filled the pasture with country music and tables were decorated with sunflowers. 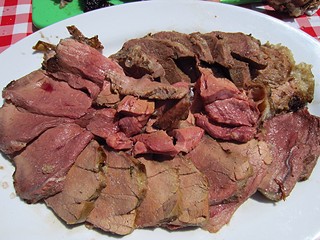 Buses from the city arrived around 1pm bringing the first wave of the 200 or so diners. Once folks had loaded up with excellent Argentine Malbec (see Chronicle contributor Margaret Shugart's sidebar) and craft beers from Live Oak, Rogness, Pedernales, and Austin Beerworks (Pearl Snap Pils was the crowd favorite), the serving stations were stocked with the empanadas. There were two types: a hearty minced-beef picadillo with tangy black olives, and a rich vegetarian version stuffed with sautéed chard, onion, ricotta, and red chile. The crust was golden and flaky, precisely crimped and delicious; a perfect start. This year they excluded the crowd from the kitchen space and had multiple serving lines, so service went quicker, with less chaos around the grill.

Rich and flavorful soup was served up next, a spring vegetable caldo with a chicken stock base full of toothsome zucchini, green peas, carrots, onions, and garlic, garnished with avocado, scallion, jalapeño, and cilantro. As the soup was being served, the Sawzall was fired up for vivisection of the gorgeously caramelized and crispy-skinned sides into center loin, haunch, and shoulder – primal cuts of beef. It took three or four guys to carry each chunk to the tents, where carving crews immediately launched into sectioning muscles and slicing. Larry McGuire and Zach Davis were in charge of carving the meltingly tender rib eye and strip loin and plating those with unctuous pulled rib meat and fantastic coarse sausage.

The meat was all perfectly cooked and juicy, with abundant beefy flavor; it couldn't have been any better. The chimichurri with fennel added garlicky punch. The coarse-textured Lamberts house sausage offered a spicy zing and a good snap on the casing. Sides were a warm potato salad with German mustard, capers, anchovy, garlic, and parsley, paired with a nice grilled red onion and two-lettuce salad with sherry vinaigrette: worthy complements to the perfectly cooked meats. I somehow managed to miss the Chocotorta dessert, described as layers of chocolate cookies dipped in espresso alternated with layers of dulce de leche cream cheese, but it's hard to imagine that wouldn't have been just as good as everything else on the table.

Vaca y Vino showcased Argentine wines and great Texas beef prepared at a distinctive entertainment venue, but the rest of the meal was just as magnifico. The second year was all about perfecting the show and branding it as a quality Lamberts event, and that was done with aplomb, even on the eve of one of the year's most anticipated restaurant openings. These folks have a very solid team, and this event should definitely be included in every beef-lover's entertainment calendar next spring.