The Art of Dining 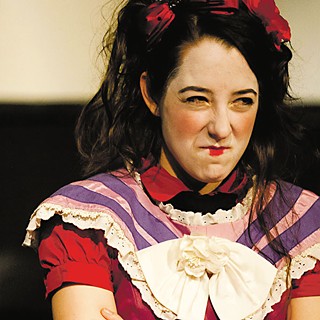 "Food is not just eating," insists Hank Cathey, culinary arts coordinator for the Fusebox Festival. Indeed, in Cathey's events, comestibles take flight, becoming words or music, paintings or performance pieces. As curator of Digestible Feats, Cathey organizes collaborations among chefs, writers, musicians, visual artists, and performers, in pieces that are "not just about being yummy, but about being interesting and compelling."

For the record, they're yummy, too.

Two tea ceremonies, both held at the Umlauf Sculpture Garden & Museum, will highlight food's ritualistic purposes in different cultures. Lord Wensleydale's Last High Tea will present a "comedy of manners, taste, and class" – emphasis on "taste" – that demonstrates the social role of British high tea. Audiences will partake of delicate pastries created by Jodi Elliott of Foreign & Domestic while enjoying interactive performances by local improv troupe Parallelogramophonograph. Zen Songs and Prayers, a more contemplative and intimate tea ritual awash in music composed for the occasion by Peter Stopschinski, will feature nondenominational prayers written by Kirk Lynn of the Rude Mechs. And Pop, Sizzle, Shatter, an expanded version of the Miniatures for Eating and Listening that chef Sonya Coté of Hillside Farmacy and musician-composer Graham Reynolds co-created, will weave the sounds of food into original musical compositions. The festival is also hosting a down-home barbecue for festival artists and audiences to share brisket, beer, and conversation.

Although he is not a professional chef, Cathey is a self-described "avid eater and drinker." Growing up in a town of 5,000 in North Carolina, he developed a taste for food that was "basic but real." "My great-grandmother made bread three times a day, every day, for her whole life. Both of my grandparents maintained gardens. I didn't eat green beans from a can until I was in college."

Cathey's first foray into food as artistic experience came years ago, when he looked at the concessions for a theatrical production he was in. "It felt like we put all of this effort and time into building this show, and now in the lobby we're selling Cokes and Snickers bars? We would talk about the theatre of hospitality, but it felt like we were dropping the ball at this point." Cathey and his fellow performers noticed how much more welcoming the lobby seemed when filled with homemade popcorn and lemonade.

For Cathey, this sense of welcome and community is food's most important function. "This is how we celebrate everything. It's how we learn to know each other. It's where our communities gather: in bars, around tables. No one can't answer the question: 'What's your favorite food?'"

As a matter of fact, years of discussing food's role in our culture have led Cathey to one critical conclusion. "Corn dogs are the secret favorite food of America," he says. "It's not the one people think of, but when you ask them if they love corn dogs, they always say yes." Drama & Tonic
Why Austin theatres are adding mixed drinks to the mix, offstage and on