The Place to Taste

"The cider and the banter is always free-flowing and often of unrivaled quality. They're really magical, timeless, crazy places," explains Austin Eastciders owner Ed Gibson when I ask him about English cider farms. Beyond the liquid in the bottle and glass, tasting rooms are the physical representation of a beverage's personality. They provide an entry into the local community and make a neighbor out of a business. Both Argus Cidery and Austin Eastciders are entering a new era as they open their first tasting rooms on opposite ends of town.

Due to the alcohol levels in cider, and the lack of its own TABC category, facilities that produce cider in Texas are primarily considered wineries, and that comes with a bonus: permission to sample and sell their product on site. And that, in turn, opens a world of possibility for cidermakers to create event spaces and a kind of community building.

As Gibson puts it, "It's what people crave these days – genuine, unmediated interactions with real human beings who care about the products they sell."

Education is important, too. People tend to think of ciders as being that sweet, quaffing alternative to beer, but craft ciders are complex beverages with layers of flavors reflective of their terroir, yeast choice, aging, and particular strains of apples. It can be a revelation for someone expecting a simple, sugary drink. Wes Mickel, owner and head cidermaker at Argus Cidery, celebrates the newfound chance to talk to people directly about his creation: "When people buy a bottle of our cider from the store and pop it open at home, sometimes they don't understand it. It's nice to be able to translate [our product] from the normal American ciders."

As both Austin cideries move to inhabit their new brick-and-mortar establishments, we take a look at the ways they are expanding their business, function, and image in Austin and beyond.

Argus Cidery began production in April of 2010 and opened their tasting room in February of this year. Set in a newly constructed barn building in the same complex as their production facility, the entire tasting room interior was hand-built by Mickel, his wife Mary (who also runs Austin firm Strange Fruit Public Relations), cellar manager Jules Peterson, and a host of talented friends. The space reminds me of architectural designs in Marfa, Texas: an open, minimalist feel swathed in bleached tones, punctured by collective sitting areas and bright colors. Its creation was overseen by Lilianne Steckel, a good friend to the Mickels and a designer from Austin. As Steckel explains, she sat down with the Mickels and their cellar manager to discuss everyone's vision, and that powwow led to a fusion of elements: the rustic feel of a barn combined with the sense of soft luxury you might find Downtown, the confluence of masculine cedar and rough wooden tables with the feminine touches of diffused lighting and welcoming color. There's a unity between the interior and exterior as well, a theme they hope to expand upon. You can sit inside or out, and the barn has large double doors that open wide for a breeze and an open view of the front lawn. In April, they plan to plant a garden for herbs and edibles, as well as design an entertainment area with activities like bocce ball.

The centerpiece of the tasting room is a large hand-built chandelier, constructed by Steckel (with the help of three friends, all young women with no prior experience but passion to spare); the four wired the chandelier's 100 bulbs in an assembly-line fashion. Every single element of the tasting room was created with that same degree of handcraftedness – building the tables from scratch, painting every surface by hand. It took more than a year to finish the project. "In the end, [the Mickels] really loved it and had a sense of pride in each piece because they had their hand in making it," says Steckel. The result is a welcoming destination spot, a place to escape from the city and have a casual day sipping cider with friends and family.

My hunch is that Argus Cidery will become a culinary destination as well. In May, the Mickels will start a Friday night supper club with family-style, multicourse meals and pairings prepared by Mickel and Peterson. Mickel has a culinary degree from the Culinary Institute of America at Greystone in Napa Valley and has worked at some of the top restaurants in the California wine country. Up until a couple of months ago, Mickel was the Senior Chef Instructor at the Lamar Culinary Center at Whole Foods Market; Mickel boasts that cellar manager Peterson is an excellent cook, too. Their dinners will change weekly and be ingredient-based from the farmers Mickel visits on his routes. In addition to Friday nights, they plan to offer gourmet picnic lunches during Saturday tasting hours, also varied by week. The menus will be posted on the Argus Cidery site, and changes can be made for those with special diets.

The Argus production facility and tasting room are located in Far West Austin, near Dripping Springs, at 12345 Pauls Valley Rd. #2. Tastings are $10 a person; cost of admission includes a sampling of two sparkling varieties and a guided tour of the facility, with barrel samples included. Visitors are then welcome to stay and enjoy sparkling or barrel-aged still cider (only available on site), beer, and wine by the glass, carafe, or bottle. Bread from Easy Tiger and artisan spreads are currently available for snacks. The tasting room is open by reservation only on Saturdays; for reservation info, see www.arguscidery.com.

From Far West to the Eastside: "Urban cidery" Austin Eastciders (www.austineastciders.com) is owned by Ed Gibson, who also operates a cider bar in Bristol, England. His flagship cider, Gold Top, was a huge hit in this market and is completely sold out. Gibson had been looking for a production and tasting room space for his next venture, which will be made from traditional heirloom cider apple varieties, sourced from Southern orchards.

The geographically specific name complicated the process of finding a permanent home, but after a long search, Gibson finally settled on a portion of the old U.S. Foods building and warehouses at 979 Springdale Rd. Writes Gibson on his blog, "I never really considered the extra challenges we would be creating by calling the business 'Austin Eastciders' and therefore restricting the search area to one very small part of the city! But being a part of what's happening in East Austin was fundamental to what we wanted to do, so locating elsewhere was never really an option."

The Eastciders space is tucked away in a surprisingly peaceful corner of the quickly changing neighborhood, its front doors opening onto a green, wooded area and, most intriguingly, an old train station. The original owner of the property was a railway enthusiast who rebuilt the vintage structure on the site, complete with tracks and a crossing sign. It now stands at the front door of the new Austin Eastciders location, adding a sense of timelessness to the place.

Gibson hopes to open this summer with a variety of ciders on tap, including cloudy, still, and sparkling varieties. Visitors will also be able to blend their own still cider from "Dry" and "Sweet" barrels, a common feature from old English cider farms. And, with his background in music and festivals, Gibson looks forward to using the tasting room, the train station, and the green space to support local art, charities, and music. He's currently searching for a flatbed railway car to use as a stage, and he plans on working with local promoters to put on shows. "I think it could turn into a really iconic performance space," Gibson wrote via email on his way back from a recent trip to the UK.

When asked about his design plans for the tasting room, Gibson says he wants to combine the vintage aesthetic of Austin artists like Joe Swec and Simon Walker with the "rustic shack chic" of English cider farms. "These old places seem to exist in a bit of a time warp, with a slightly illicit speakeasy-cum-dive-bar feel about them. They're typically dimly lit old shacks, furnished with whatever random junk they've acquired over the years, and have a very relaxed, welcoming atmosphere," Gibson says. "I think having something like that in the middle of East Austin will be a suitably bizarre addition to the local scene." 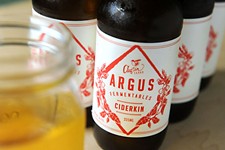