Virginia's got meat on her mind

In keeping with the explosion of barbecue in the national culinary consciousness and cultural conversation over the last 10 years, the powers that be at Texas Monthly have been expanding their claim to Texas barbecue coverage. We're not just talking about Wyatt McSpadden's evocative barbecue photography or big cover stories naming the top 50 barbecue joints in the state, but the creation of a TM BBQ Finder mobile app, as well as a dedicated site, www.tmbbq.com. The magazine now hosts a barbecue festival in Austin every fall, attracting thousands of people to the Long Center Terrace, and last week, Editor in Chief Jake Silverstein revealed the hiring of the Monthly's first ever barbecue editor, Dallas-based blogger Daniel Vaughn. Over the past few years, Vaughn has developed quite a following with his Full Custom Gospel BBQ blog and as @BBQsnob on Twitter. He is also the author of the forthcoming The Prophets of Smoked Meat: A Journey Through Texas Barbe­cue, the first book from Anthony Bourdain's personal imprint at Ecco Press. Vaughn will also be a featured speaker at Our Barbecue, Our­selves, the topic of this year's Foodways Texas Symposium, here in Austin, April 4-6. Look for a review of Vaughn's new book, as well as a review of Barbecue Crossroads: Notes and Recipes From a Southern Odyssey (University of Texas Press) by former Austin Chronicle Food editor and symposium speaker Robb Walsh, on our Food blog (austinchronicle.com/blogs/food) that week.

Two of our favorite local salumerias are in the news this week. The everything-from-scratch aesthetic at Noble Sandwiches (11815 RR 620 N.) continues to attract all kinds of attention, even after they dropped "Pig" from the name: Last week, their bacon and egg sandwich with pickled spring onions was showcased in a Bon Appétit magazine feature. In case you're not familiar with the work of chefs/owners John Bates and Brandon Martinez, everything they serve is made in-house, from bread to spreads to cured meats to pickled condiments. Mean­while, Salt & Time Butcher Shop & Salu­mer­ia (1912 E. Seventh) has recently added evening service hours from 6-9pm on Friday and Saturday nights, with craft beer, wine, and small plates. They are also now offering brunch service on Sundays from 11am-3pm, with a menu that includes picnic fried chicken, corned beef hash, breads and pastries from Baked in Austin complemented by jams and jellies from Confituras, and coffees from Cuvée. S&T owners Ben Runkle and Bryan Butler have smartly created synergistic situations with other local businesses that work out in everyone's favor. Baked in Austin's Simon Perez creates rustic artisan breads in their kitchen overnight and sells his wares at places such as in.gredients and Drink.Well, in addition to Salt & Time. Cuvée Coffee has a kiosk that provides excellent coffee drinks to the store's morning clientele, and Stephanie McClenny increases the distribution of her small-batch Confituras products to yet another local boutique retailer. 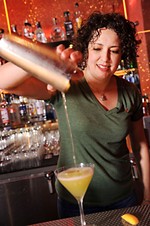