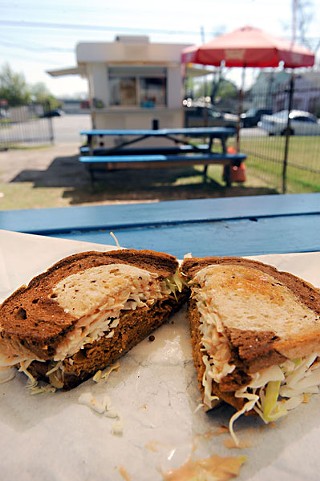 
Behind the Eastside bookstore-artspace-clothing shop now known as Farewell Books hides a tiny white trailer with a simple sign on the side street, beckoning customers with a simple word painted in red: DELI. And it's not just any deli; it's Austin's only vegetarian/vegan Jewish sandwich trailer, Schmaltz, opened by proprietor Julia Hungerford, the unfailingly friendly local drummer who channels her own vegetarian grandmother with a modern, Austin flair.

Walk up to Schmaltz on any given afternoon and you'll find a tiny oasis against the backdrop of urban gentrification and ceaseless Downtown development. Yellow picnic tables rest under shade-giving canopies, while rock music blares (politely) from the trailer. Absent the transactional nature of the space, it might almost feel like a picnic in a good friend's backyard, although Hungerford and her boyfriend-helper, Russell, certainly buffer the layer of commerce with their hospitality.

On my first visit to Schmaltz, during Purim, I will confess that I played it safe. I was on a mission to get my mitts on the matzoh ball soup ($4), which is only available on Fridays and Saturdays, so ordering a sandwich was, quite frankly, an afterthought. In fact, I inhaled the soup before my Phillip Guston Garden Sub ($7) was even ready to go. The wholesome assemblage of carrots, pea shoots, avocado, cabbage, cucumber, and mustard on soft hoagie roll was light and tasty, a perfect accompaniment to the matzoh ball of perfect consistency kissed by a light, almost buttery broth.

My next visit was during SXSW, which apparently necessitated a limited menu, with only the Harvey P. Seitan "Pastrami" Reuben ($8) and Frankenthaler Falafel Wrap ($7) available in addition to the garden sub. I enjoyed the reuben; even though Hungerford's homemade seitan was a bit too mildly flavored for my tastes, the chipotle Russian dressing paired nicely with the crunch of the cabbage. The best part of this sandwich is the substantial, marbled rye, grilled to crisp perfection and studded with caraway seeds. More successful, in terms of sheer flavor, was the falafel wrap, comprising three green, griddled chickpea patties topped with tomatoes and a heaping portion of tahini-dressed shredded cabbage. The bread was a tender flatbread that might also go well with a creamy hummus, should Hungerford decide to expand her menu in the future. On this visit, the matzoh ball soup was a bit too far on the salty side, so much so that neither my husband nor I could manage more than a few tastes of it.

Other sandwiches, which carry on the deli tradition of being named after famous people, include a Groucho Marx Mushroom Melt featuring cremini and white mushrooms ($8); the Gertrude Stein Goat Cheese, a goat cheese and red pepper sandwich studded with cucumbers and tomatoes ($8); and the Art Spiegelman Falafel Patty Melt with Swiss cheese on that incredible marbled rye ($8). Sides include homemade pickles, mostly mild in flavor, and an assortment of green beans, okra, green tomato, and bell pepper. Hungerford is also quite proud of her vegan potato salad, which I did not have the opportunity to try due to it being sold out, but it's been getting very good word-of-mouth; I look forward to trying it on my next visit. Hungerford also offers homemade kombucha, including peach-mango, ginger, and berry-lime varieties (the batch varies from day to day). The lunch would be perfect if there were some cookies or brownies available for purchase; perhaps Hungerford could partner with Kristen Davenport of Capital City Bakery to offer a few vegan desserts, especially for dinner service, which Hungerford recently mentioned is on the horizon.