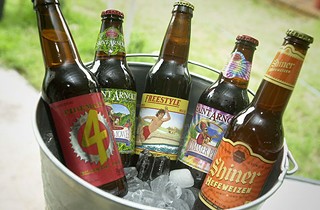 Fireman's 4, a blonde ale, was a local favorite long before it won an award at the Great American Beer Festival (GABF). Real Ale Brewing is nestled in the Hill Country an hour west of Austin.

Pearl Snap, a German-style pils by Austin Beerworks, comes in a very Instagram-able can.

Santo – with one "s" – by St. Arnold's Brew­ing in Houston is like a Chuck Norris kick in the mouth. The makers call it "a black Kölsch."

Funk Metal is a barrel-aged stout by Jester King. Some joker made a sour stout, and now it's on your bucket list.

Live Oak HefeWeizen, a wheat beer to beat the heat by one of the oldest breweries in town.

Naked Nun from Adelbert's Brewery is a wit ale by a local brewery specializing in Belgian-style beers.