Kickin' It Old School: Historic Dining in the ATX 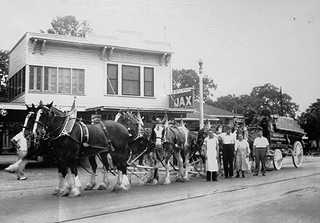 Scholz Garten (1607 San Jacinto) Austin's oldest outdoor biergarten and dining hall was built by German immigrant August Scholz in 1866 as a place for the large local German population to eat, drink, and discuss politics. They still serve some traditional German dishes alongside nachos, burgers, and more.

Dirty Martin's Place (2808 Guadalupe) John Martin opened this West Campus dirt-floored drive-through in 1926. Still known as Dirty's, it's served the same fresh-beef burgers, chicken-fried steak, fries, nachos, shakes, and beer ever since. These days you must go inside, but there is a floor.

Cisco's Restaurant and Bakery (1511 E. Sixth) Rudy "Cisco" Cisneros started as a baker on the Eastside and opened the restaurant in 1948. State politicos, including LBJ, wheeled and dealed over the excellent migas, huevos rancheros, chorizo, biscuits, fajitas, and enchiladas that Cisco's still serves for breakfast and lunch.

El Patio (2938 Guadalupe) The North Campus-area El Patio has served the same classic combination dinners on the same Formica tables since 1954; its devoted customer base included Lady Bird Johnson and Walter Cronkite. This is Tex-Mex at its purest: enchiladas, crispy tacos, beans, rice, guacamole, and pralines or sherbet.

The Tavern (922 W. 12th) Between 1916 and 1933, this fanciful structure, modeled after a German public house, was the site for a grocery, a steak restaurant, and a speakeasy/ brothel. When Prohibition ended, the Tavern restaurant/bar was born. The upgraded interior now sports 50 screens, craft beers, and a menu of snacks, sandwiches, burgers, and plate lunches.

House Park Bar-B-Que (900 W. 12th) is a smoke-stained barbecue shack in business since 1943. Serving lunch on weekdays only, their slogan (quoting the late Austin pitmaster C-Boy Parks) is "Need no teef to eat my beef." It's all about the meat: mesquite-smoked brisket, pork loin, Elgin sausage, and chicken. No booze, no vegetables, no frills, no credit cards.

Quality Seafood Market (5621 Airport) From humble beginnings in a Congress Avenue stall to the present market/restaurant location on Airport Boulevard, Quality has been Austin's signature fishmonger since 1938. Current owner Carol Huntsberger celebrated the recent 75th anniversary with major expansions of the space and menu. Go for oysters, Gulf shrimp, and Cajun- and Creole-influenced seafood dishes.