Down Home and Chicken-Fried ... Steak, That Is 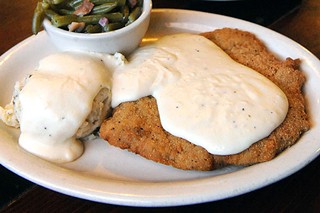 Jack Allen's Kitchen (7720 Hwy. 71 West) This one is made with tenderized New York strip and smothered in green chile gravy. My vote for the best chicken-fried steak in town.

Hoover's (2002 Manor Rd.) This CFS has an extra-crisp fry over tender meat and a smoky bacon gravy that's worth every calorie. Don't skimp; order the extra cutlet.

Green Mesquite (1400 Barton Springs Rd.) A sleeper on the list, this Barton Springs joint known for barbecue also happens to make one of the best chicken-fried steaks in town.

Moonshine Patio Bar and Grill (303 Red River) This CFS has chipotle cream gravy in place of the more traditional bacon gravy, and it packs a wallop.

Shady Grove (1624 Barton Springs Rd.) The Grove's CFS is crisp and tender in all the right places; order with hatch chiles to make it special.

Hill's Cafe (4700 S. Congress) This cracker-crusted CFS with cheesy 'yella' gravy is something of a legend in these parts, though I prefer the more conventional white bacon gravy.