One of the rural royal families of Central Texas barbecue is back in the news this week. No sooner had barbecue lovers learned about the opening of John Mueller Meat Co. (2500 E. Sixth), and that La Barbecue (1502 S. First) owner Leigh Ann Mueller had made a deal to keep pit man John Lewis here in Austin with expanded pit capacity, than the news came from Taylor that the original hallowed brick pit at Louie Mueller Barbecue (206 W. Second, in Taylor) was destroyed by fire over the weekend. A grease fire that broke out on Saturday, Feb. 23, reignited Sunday morning, adding another 50 years worth of smoke to the sepia-toned old building and destroying the venerable old brick pit that dated back to 1959. Third-generation proprietor Wayne Mueller told us Monday morning that, despite the smoke and water damage, the Williamson County Health Department estimated the restaurant could reopen within a couple of days, using the three other pits on the property. Mueller also said he's already taking bids for a glazed brick pit to replace the original and hopes to have it rebuilt and seasoned for use in the next couple of months. Plans are also in the works to sell etched bricks from the original pit as souvenirs to help raise funds for its replacement. We'll keep you posted.

Based on the success of their 2012 fundraising efforts, the Austin chapter of Les Dames d'Escoffier International plans to award four $2,000 scholarships to local female culinary students this spring. See details on scholarship criteria and download applications at www.ldeiaustin.org. The application deadline is March 25.

Although there's no official culinary component to South by Southwest as of yet, a mouth-watering array of ancillary food events seems to sprout up every year, each more taste-tempting than the last. BakeSpace.com founder Babette Pepaj will be back at the Whole Foods Market with her traveling food blogger conference known as TECHmunch, Mon.-Wed., March 11-13. Check out their new website for the full scoop at www.techmunchconf.com, and make a plan to join in... At press time, Austin's own Top Chef Paul Qui was still working out the final lineup for the South Bites food trailer court he's curating at the corner of Cesar Chavez and Red River over the next couple of weeks, but he has said they are recruiting top food trucks from other Texas cities as well as some local favorites... Among culinary celebrity appearances, hot new firebomb-throwing food writer and NYC restaurateur Eddie Huang will be in town to lead an Inter­act­ive panel at the Hyatt called "The Social Media Chef" on Monday, March 11, and then move on to the Convention Center where he'll sign copies of his new book, Fresh Off the Boat: A Memoir (Spiegel & Grau)... The traveling roadshow known as the Brooklyn Brewery Mash sets up shop in town March 6-10, with a variety of taste-tempting events featuring chefs Marcus Samuelsson and Andrew Gerson of NYC working with some of Austin's favorite chefs. We'll be posting more details about these tidbits as well as breaking culinary news on our On the Range blog over the next couple of weeks, so stay tuned. 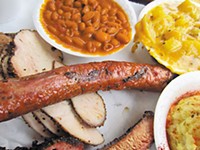 Food-O-File
Thoughts on the fall of John Mueller

Food-o-File
To the victor belongs the cheese 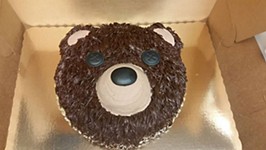