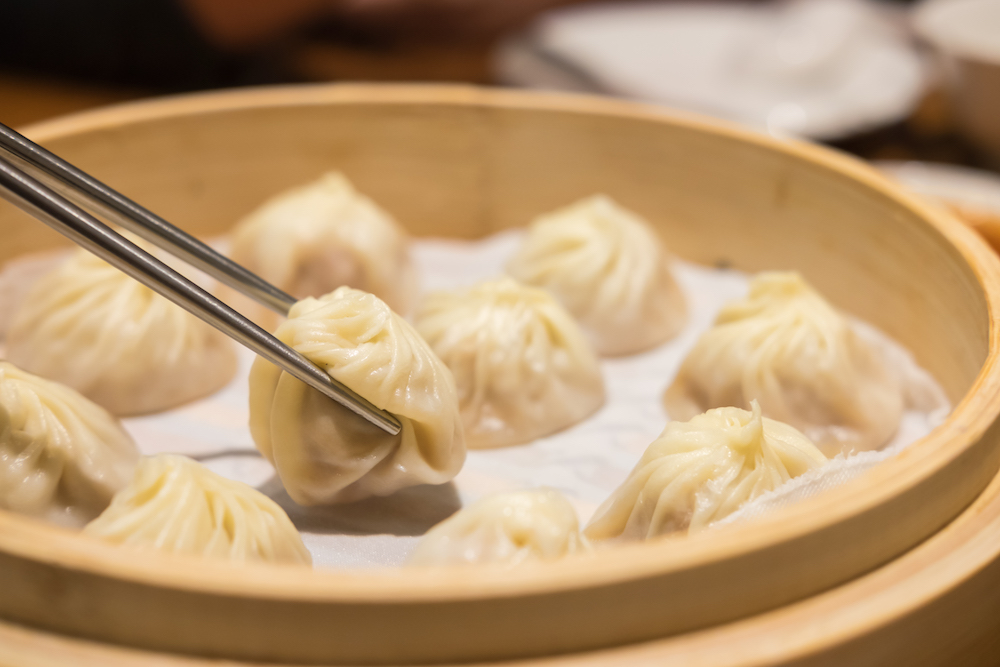 The term "soup dumplings" refers to soup contained within dumplings (rather than dumplings in a bowl of soup.) These are a favorite dim sum of Shanghai, as eating each dumpling produces an explosion of rich broth. Traditionally, the congealed broth used in the filling was made by boiling-down pigskin in water for two days until it became rich and gelatinous. Today, with the advent of prepared gelatin, the process is much simpler. In the few restaurants where these dumplings can be found outside of China, they are often served cradled in a Chinese soup spoon, so as to catch all of the luscious broth.

1. Prepare the stock by bringing the seasonings, the water, and the chicken parts to a boil. Skim the surface as the stock simmers, and slowly cook the stock for 4 to 5 hours (there should be 1 to 2 cups of very rich chicken stock when done.) Adjust seasoning for salt.

2. Bring 1 cup of the stock to a boil in a saucepan, remove from heat and add the softened gelatin, while stirring. Allow the mixture to cool to room temperature, then pour the gelatin stock into a small baking pan to chill. (The solidified gelatin will be cut into ¼-inch cubes. Select an appropriately sized pan.)

3. Combine all of the filling ingredients, mix well and refrigerate at least 2 hours, preferably overnight.

Preparation of the dough

4. Mix the flour, baking powder and the salt together. Stir in the eggs, one at a time. Make a well in the center and add the flour mixed with boiling water and stir well to combine.

5. Knead the sticky dough into a smooth, elastic mass, dusting the work surface with flour as needed. Once the dough has become smooth, continue kneading for 10 minutes. Cover the dough with plastic film and allow it to rest for 1 to 2 hours, refrigerated.

Preparation of the dumplings and buns

7. Divide the dough into 4 equal pieces. Roll each into a 10-inch cylinder then divide each cylinder into 16 equal portions. Using a rolling pin, roll each of the 16 pieces into a 3-inch circle, with the edges thinner than the center. If the dough starts to stick, dust the work surface with corn starch as the dough is worked. Cover the circles as they are formed

8. Fill the circles by placing 1½ tablespoons of the filling into the center of each round. To form soup buns, pleat the edges in a circular fashion and gather all the edges in the center (forming a "purse".) Leave a small hole in the center of the crimped pleats to allow steam to escape while cooking. Continue until all are filled, always keeping the dough and the finished dumplings refrigerated and covered with plastic film.

9. To make soup dumplings shaped like a potsticker, place 1½ tablespoons of filling on one half of the circle. Wet the perimeter and fold the dough over the filling, forming a semicircle. Begin to pinch the seam, starting at the ends, working your way to the top of the dumpling. Leave a small space unsealed at the top.

10. Pinch the dough around the opening, forming a pleat perpendicular to the seam. Continue to pinch the pleat all the way across the dumpling. When done, there should be two seams, perpendicular to each other, with a small steam hole on top.

11. Steam the buns or the dumplings in a Chinese-type steamer, lined with cabbage leaves or perforated, oiled parchment paper, for 12 minutes.

12. Serve 4 dumplings directly from the steamer, in small bowls. Top with finely minced scallions. A dipping sauce should not be needed, but if one is preferred, use the dipping sauce recipe below, or offer a small bowl of Chinese black vinegar topped with ample, julienned fresh ginger. Alternately, ½ fluid ounce of chicken stock may be ladled over each serving of the dumplings.

• If you prefer to use pork stock in place of chicken, substitute pork neck bones and trotters for the chicken bones and feet.

• Some cooks prefer a filling with cooked or raw minced pork belly replacing the minced pork in the filling recipe.

• Lump crab meat and crab roe can be substituted for the shrimp in the filling.

• These dumplings should be cooked as soon as possible after being formed, as they will dry out and begin to leak after some time (refrigeration can help to hold them for a few hours.) They should not be frozen.

• Pre-made gyoza wrappers or wonton wrappers work well as a substitute for the homemade wrappers (and offer a bit less texture than homemade.)

• Ideally, make the stock and filling one day then make the dough and the dumplings the next day.

½ teaspoon sugar, or to taste

For the dipping sauce, blend all ingredients together and stir to dissolve sugar. Allow to stand a minimum of 10 minutes (can be made one day in advance).