The folks behind Perla's offer fancy seafood, a casual vibe, and an adventurous wine list 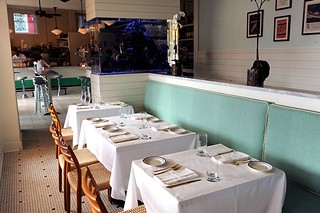 Places that sell really fresh seafood have distinct aromas. The appealing fragrances always carry a hint of the sweet and salty smells of the ocean. Now imagine adding a whiff of fresh baked bread, as well as the tang of a grill loaded with vegetables and the occasional burger. That's a fair description of the experience you'll have when you walk through the front door of Clark's Oyster Bar. The good news is everything that follows will live up to that first mouthwatering impression.

Clark's offers luxurious menu items like Champagne, rare oysters, and caviar. But that's not what makes it distinctive. It is their attention to detail that sets them apart. They handle the minutiae so well that you may not notice it. Here are a few examples. Since the place is inevitably full, they've set aside tables so that folks with reservations (highly recommended) can get in very quickly, but there are an equal number of seats at the bar or outside for walk-ups. That's a thoughtful way to deal with both groups. Also, the high ratio of staff to customers costs the owners money, but it also assures that someone is just waiting to help you. The first thing they deliver is a few slices of bread with a small dish of butter and some flaky sea salt. That may sound normal, except the bread is stunningly good, and so is the butter. We ask why, and are told that both are made in house. This staff has their eye on the most subtle niceties. 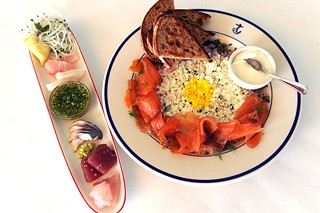 That thoughtfulness carries over into the kitchen. We tried both a Sunday brunch and a dinner. For brunch, we started with the Sashimi Plate ($16), which featured real wasabi (quite an uncommon item in Austin sushi bars) and a pickled ginger that tasted homemade. Their Smoked Gravlax Plate ($14) featured several slices of nicely smoked salmon atop a picture-perfect bed of chopped eggs, onions, and capers. The Tuna Salad Sandwich ($14) is a huge concoction that is mostly juicy chunks of tuna topped with a garlic confit, with just a touch of mayonnaise spread on the bread. This sandwich was accompanied by delicious matchstick fries that were textured like a dream. We also tried the decadently rich Lobster & Farm Egg en Cocotte ($24) – basically a classic French oeufs en cocotte with a large lobster claw and a piece of the tail meat. The accompanying grilled carrot and asparagus salad was good enough to make a tasty entrée itself. A bottle of the always superb Venica "Ronco del Cero" Sauvignon Blanc ($49) from Collio was the perfect accompaniment.

Clark's also offers several bargains for those who want their great food to be sensibly priced. At dinner one night, we split everything. The Clark's Wedge Salad ($10) is a classic, with buttermilk dressing, Maytag bleu cheese, lardons, and a hard-boiled egg. Their incredible bread showed up again – grilled – accompanying the Mussels & Clams ($18) in a white wine and herb sauce. The shellfish were cooked to a perfect texture, and dipping the bread into the sauce was the peak experience of the night. We rounded the meal out with heavenly Wood-Grilled Brussels Sprouts ($7), assertive Grilled Tuscan Kale ($6), and a bottle of Hugues Beaulieu Picpoul de Pinet ($8 glass/$28 bottle).

My single favorite part of the Clark's experience is their wine list. It's like the buyer, Alex Ramirez, has been reading my diary. The list is short, creative, and courageous, and it is packed with incredible wines. White wine lovers should try the aforementioned Hugues Beaulieu Picpoul de Pinet. This Languedoc wine is a near perfect introduction to the grape, and the bottle price is insane. If you prefer red wines, try the Joseph Castan ($10/$36) from Rhône's Vacquey­ras or the Edetaria Vinya D'Irto Garnatxa ($12/$44) from Spain's Terra Alta. As both of these wines are primarily Grenache, they allow a good comparison between the French and Spanish styles.

The folks who own Clark's also own Lamberts, Perla's, Elizabeth St. Cafe, and Fresa's. They describe Clark's as "Perla's little brother." I happen to be a fan of Perla's, but I wouldn't even compare the two. They're both very special, but Clark's is more intimate, more bistrolike. I've lived in some great seafood towns: Boston, Portland, and Los Angeles to name a few. The greatest compliment I can give Clark's is that you could pick it up exactly as is and deposit it in any of those cities and it would likely be just as crowded there as it is here. It's that good. To find it here in Austin feels like we've been blessed by Neptune.