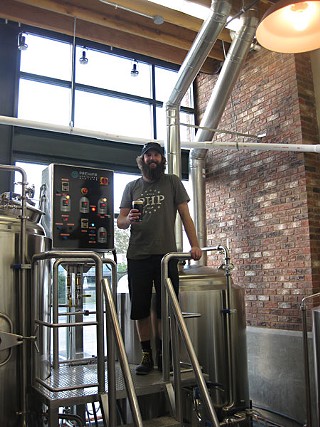 When I arrive at Pinthouse Pizza in the lull between lunch and dinner, Joe Mohrfeld, the brewpub's head brewer, is in the middle of a conversation with a regular customer, a member of the Austin Zealots homebrewers club. The two are at the bar, just yards away from the brewing equipment on prominent display. The stainless steel tanks contrast sharply with the long, wooden tables and exposed brick walls. I don't dare interrupt. This face-to-face interaction is precisely what Joe moved to Texas for.

Joe only arrived in Austin this past February, but brewheads have been buzzing about him since before his first barrel here could even be tapped. "I'm kind of new, and I feel like almost everyone I meet is in that same boat," he observed. For a new guy, he's been busy. The events he hosted during Austin Beer Week sold out, and recently he was invited to speak at a panel hosted by Hops & Grain. Joe comes to ATX from the respected, family-owned mountain brewery Odell Brewing in Fort Collins, Colo. He started as a volunteer there while he pursued a master's in communication studies. "I chose where I went to grad school based on the access to craft beer," he said.

"A professor of mine in college got me into homebrewing," he said about his time as an undergrad philosophy major. "I always felt like I needed an artistic outlet growing up, but I never could find the right one: music or drawing or writing. Writing was more difficult than it was a release. Brewing just made sense to me."

He carried this passion for beer into nearly every aspect of his life in Colorado. His master's thesis analyzed the culture created through branding from New Belgium Brewing. "Gone are the days of passive consumption," he wrote. "As we enter this postmodern terrain we find ourselves lacking a sense of place, a sense of place that can only be recovered through the choices we make in the everyday. Consumers are beginning to consume even necessary items based on the narrative being told about the product. The gallon of milk versus the gallon of milk with a story [...] the choice is becoming one of identification with a narrative rather then pure consumption."

"I got to the end of grad school and decided I didn't want to be an academic," he said. "I wanted to be a brewer." Instead of pursuing a Ph.D., he worked his way up through packaging to head brewer at Odell. He led a team of brewers at a great brewery, he met a lovely lady who also had a passion for the alcohol business, and he was named one of the 20 most eligible bachelors in craft beer. What would knock loose a man who seemed to have it all and bring him down to his first summer with three-digit temperatures?

"I knew I wanted to be in a brewpub, to be in a smaller system with creative freedom, having that one-on-one interaction with the people drinking your beer," said Joe. "It's really fun for me to get that feedback. I get to sell my beer to people and watch them drink it." The vision of the five owners of Pinthouse Pizza appealed to Joe's ideas about community and culture in the craft beer experience, as well as his upbringing around the restaurant business. "If you're going to be part of the community, historically that's at a pub. For us, it's this Rosedale/Allandale neighborhood."

"It's where I want to be in my professional life and personal life." He said the conversation with his girlfriend, a bona fide foodie, went something like this:

"What do you think about moving to Austin, Krystal?"

"Texas or Minnesota?" [Joe is originally from the area around Austin, Minnesota.]

"Cool." That's what she had heard about Austin, that it was a cool place to be. "The Austin breweries can't make enough beer," they'd heard. It was an easy sell.

"What you had in Colorado was a lot of established breweries, that first wave of craft breweries from about 15 years ago," said Joe. "People are making great beer in Colorado, but it's not my generation."

"Texas is never somewhere I thought I would've moved, growing up in Minnesota," he said. "[But] it seems like there's a lot of creative types moving here. That's what keeps a town fresh and innovative."

Ivy Le, a new and thirsty Austinite, hails from Dallas, but has been writing in Georgia for the last 11 years. Follow her on Twitter @UrbanHaiku.