To be healthy, wealthy, and weiz 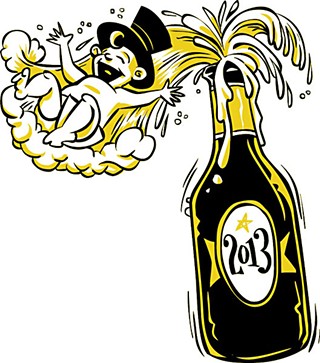 I don't make resolutions to break them, to cheat and slip and let them roll over meekly to the next year in 11 months. I make New Year's resolutions to fail with great pomp, to trip short chasing my smarter, thinner, kinder, or richer self and face-plant in unfamiliar, delicious, new – and improved – terrain.

It's easy to mock the well-meaning masses. Statistics predict that a third of people will break their resolutions by the end of January. Half of them will have given up by July, but these attempts mark the time passing. What's more, people who make a formal resolution are, in fact, more likely to move toward their goals than people who ironically make fun of formal resolution-making.

Are you new to town like me, or one of the new drinkers who helped grow the craft beer industry in 2012 – while the overall beer industry shrank? Let's resolve some things together, hold each other accountable to beer, and drink to our successes this time next year. These are my hardly frivolous 2013 beer-solutions:

Engage civically. In the upcoming legislative session, I will let my representatives know that I am paying attention to legislation that hurts or helps the small beer business owner. In 2011, Jester King Craft Brewery, along with Zax Restaurant & Bar and distributor Authentic Beverages, took the lead to sue the TABC over labeling laws, and won. That victory proved that we don't have to passively complain about out-of-date statutes. The legislators we just elected still have some work to do to allow craft beer businesses to thrive.

Discover something before it becomes cool. I resolve to post more about stories I am working on, hoping that you readers will weigh in and help something get discovered. I read comments on the stories and tweet @UrbanHaiku.

Host a supping club. It'll be like a supper club, but with more sipping. This is how I resolve to spread the good word about beer – like the guys at HandleBar pouring rare beers for casual drinkers, the bloggers at BitchBeer.org, and the podcasts on TheBeerists.com.

Help raise funds for a nonprofit. Responsibility to the community has been a common inspiration among all Austin craft brewers I've met. Hops & Grain, for example, gives 1% of their annual revenue to 1% for the Planet. Since I don't own a brewery, this is my beer equivalent.

Become a regular at a package store. I've been hopping all around town to learn the city, but it's time to build the relationship of being a regular customer somewhere with a knowledgable staff.

Try a new beer every week. Keep records faithfully, so I know what I've had before. Even a place like the Whip In, with its reputation for a impressive beer stock, pushed itself in 2012 to try something new. They started brewing small batches of their own beer four months ago, and the recipes are ever-evolving.

Trade beer. Texas is really starting to make its mark in the craft beer world, winning nine medals at the annual Great American Beer Festival in Colo­rado this past year. Next year, I'm capitalizing on this cachet to trade for beers I can't buy in Austin.

Reduce waste. I've grown fond of the ubiquitous recycling waste baskets in Austin. While Austin makes it easy to recycle glass, it's much more environmentally friendly to recycle aluminum and reuse glass. I resolve to save my beer bottles for my favorite home brewers.

Do you have new year's beer-solutions? Well, get you some, and let me and all your friends know what they are. These are resolutions you'll love to keep.