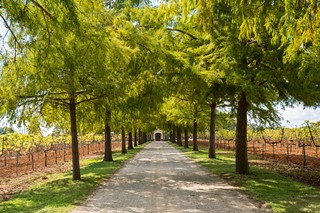 An allée of cypress trees leads to the entrance of Fall Creek's winery. (Courtesy of Michael Chu)

Deep in the heart of the Fall Creek Vineyards is a set of massive wooden doors. They're obviously far older than the rest of the structure, and they bear a small brass plaque that reads, "Original Stable Doors, Louis Pasteur Hospital, Paris, France." There's also a quote from Pasteur, the 19th century scientist who discovered the nature of fermentation: "Wine is the most healthful and most hygienic of beverages."

These old doors are an apt symbol of what goes on at Fall Creek Vineyards, the third largest and third oldest existing winery in the state, where grapes are grown and fine wines are created based on knowledge that has an interesting direct connection back to Louis Pasteur's work. (More on this connection momentarily.)

Austinites Ed and Susan Auler built Fall Creek Winery 30 years ago in the Texas Hill Country, near Tow in Llano County. The land, adjacent to Lake Buchanan, has been in Ed Auler's family since 1928 and was a working cattle ranch for three generations. After taking over the ranch management in 1969, Auler explains how they first got interested in wine. "Three words," he says. "Low cattle prices."

The Aulers had been contemplating possible agricultural enterprises to augment the cattle (pecans? peaches? apples?) when they visited France in 1973, following the 21-day itinerary from Frederick Wild­man's book, A Wine Tour of France. Not only were they transported by the wines they tasted, they were struck by geographic and climatic similarities among Bordeaux, the Rhône region, and the Texas Hill Country. So the big idea occurred, "Why not grapes?" 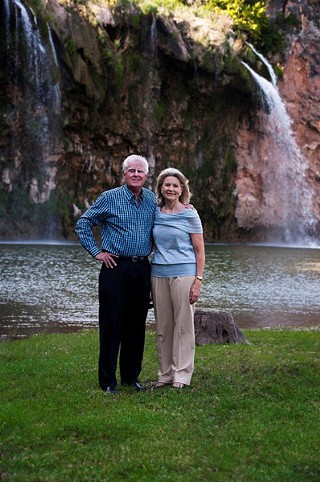 Why not, indeed? Wine grapes were first grown in Texas in 1662 (a century before being planted in California), but Pro­hi­bi­tion quashed Texas winemaking in the 1920s. About the time the Aulers had their brainstorm, agricultural scientists at the Univer­sity of Texas and Texas A&M got interested in establishing grape test plots. So in 1975, 13 varietals were planted at Fall Creek, mostly French-American hybrids. (Indeed, many French wines today are in fact Texas hybrids and they have been since the 1880s, when horticulturalist Thomas V. Munson of Deni­son, Texas, saved the Euro­pean wine industry from a total loss of vines caused by the root louse Phylloxera vastatrix. Munson grafted European grapes onto Texas native rootstocks that were mostly immune to the bug, and these were planted in France to replace the diseased vines.) The Aulers studied viniculture at UC-Davis and continued experimenting, planting classic vinifera grapes: Cabernet, Merlot, Char­donnay, Chenin Blanc, and Sauvignon Blanc.

Auler remembers that their first vintage was 250 cases; he hauled them in his car to three late, lamented independent winesellers: Dan's in Austin, Richard's in Houston, and Marty's in Dallas. However, he says, "Winemaking was never a hobby, it was always going to be a business. So I just kept plodding ahead, concentrating on quality and value." Now the winery's new bottling system can process as many as 2,500 cases a day, and Fall Creek wines have won dozens of national and international awards.

After making their first Cabernets and Mer­lots in the Eighties, the Aulers met André Tchelistcheff, called "the most influential winemaker" in the U.S. by The Wine Spec­tat­or. After tasting their wines, his advice was "plant more!" Tchelistcheff, who'd studied oenology, fermentation, and microbiology at the Pasteur Institute in Paris, served as consultant to Fall Creek for four years. (There's the Louis Pasteur connection.) Meritus, the winery's prizewinning Cabernet/Merlot/Syrah blend, was influenced by Tchelistcheff's advice and philosophy.

When Fall Creek was first conceived in the 1970s, making Texas wine was almost unknown and wine drinkers were few. But other vineyards and wineries developed steadily, and today the Texas wine industry is the country's fifth largest, with 300 grape growers and 200 wineries producing a million cases annually. From the early days of the 1980s, Susan Auler worked tirelessly to raise consciousness about Texas wines; with three Texas chefs, she founded the Texas Hill Country Wine & Food Festival to showcase Texas wines and food and to promote wine knowledge and enjoyment. For 26 years, THCW&FF threw a premier wine celebration, bringing Texas wines to the attention of the rest of the world, bringing the rest of world's wines to Texas, and becoming one of the three largest wine festivals in the country.

And now, as the universe of wine grows and evolves, so too does Fall Creek. "Wine is the world's fastest changing industry," says Ed.

This vertical rock formation near Fall Creek Falls was uncovered as the water level of Lake Buchanan receded due to the drought. (Courtesy of Michael Chu)

"What was true even a couple of years ago isn't necessarily true now," agrees Susan. "You have to be nimble." Thus, new developments are happening fast: There are expansions at the Fall Creek facility and vineyards, including the planting of some exciting new varietals. They'll be opening a new winery nearby. And Fall Creek is taking on winemaking for Salt Lick Vineyard grapes, including Tempranillo, Sangiovese, Gre­nache, and Mouvèdre.

One new development directly results from the epic Texas drought. Lake Buch­anan – created in the 1930s by LCRA damming the Colorado River – has receded drastically over the past five years. Along the Fall Creek land, the water level is down to the original river's course, revealing fertile, silted riverbanks and beautiful geographic features that have been underwater for many decades. So, nimbly turning drought lemons to lemonade, the winery now arranges tours for visitors to view the gorgeous 100-foot Fall Creek Falls, as well as adjacent Native American campsites, caves, and a huge vertical rock formation that was once a sacred site.

For millennia, humans inhabited the Hill Country, especially the Colorado River valleys. It was a crossroads for nomadic tribes, trading and following seasonal food sources. Fortunately, before the area was flooded by Lake Buchanan, UT archaeologists collected 35,000 artifacts there – most prehistoric – that included mummified human remains and cave pictographs. These are now part of the Texas Archeological Research Laboratory collection at UT, the largest archaeological repository in the state.

The Aulers refer to this tour of newly revealed sites as "Fall Creek's first 10,000 years." They love the fact that an indigenous food was wild mustang grapes. Based on archaeological evidence, early inhabitants also feasted on Colorado River mussels, which apparently still exist in parts of the ancient riverbed. Who knew that?

In considering the wine business today, Ed Auler says, "The good news is that there are more wine drinkers now, more demand. The bad news: tremendous price wars due to retail consolidation and direct imports. All the challenge and fun of making wine is still there, and for us, the positives always outweighed the negatives. There've been some thorns on the roses, but there sure have been some pretty roses."

Time to raise a glass to more pretty roses, and to Fall Creek's next 30 years. Salud!

The tasting room at Fall Creek Vineyards is open seven days a week. Private tours of the vineyards and falls can be arranged, and there are regularly scheduled seasonal events. Go to www.fcv.com for info on Fall Creek wines, tasting room hours, tours, wine dinners, and special events. 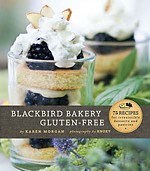