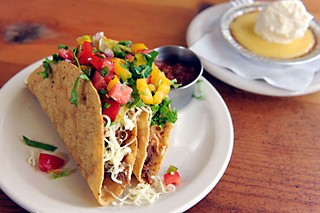 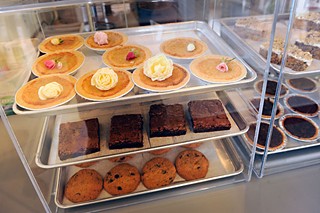 For me, Southern cooking evokes cozy cottages and picket fences. It conjures up cool iced teas sipped in tree-dappled sunlight. Southern cooking is cornbread and pies, yeast rolls and bacony greens, coleslaw and barbecue. If you've eaten at Elaine's Pork & Pie, you'll know exactly what I mean, because this tiny snuggery seems like it jumped out of a Southern Living postage stamp. The eponymous Elaine is Elaine Martin, owner of the neighboring Eastside Cafe, who, after nearly 30 years in the biz, knows her way around an oven. And while the limited menu here represents just a small slice of Southern cuisine, it captures its essence.

At Elaine's, there is pulled pork, and there are pies. Oh, and there's lentil soup too, but who really wants soup when pulled pork beckons? The pork comes two ways: in a taco or on a sandwich. In both, the meat itself is the same – slow-simmered, moist, but not fatty; flavorful, but not aggressively spiced. It is the centerpiece for the low-country-style pulled pork sandwich, drizzled with molasses sauce, and studded with tangy napa slaw and red onion ($5.95). The fresh brioche buns are delicious but barely stand up to the messy, saucy meat inside. Toasting them first would give them a boost.

The sandwich is good, but I like the tacos even better. The pork is stuffed into a crisp corn tortilla shell, topped with the usual suspects, but also with diced mango. Paired with the fire of a tomato salsa, the flavors work beautifully.

But don't stop with the meat because the real attraction at Elaine's are the individually sized pies, cookies, carrot cake, brownies, and other desserts. Elaine's pies ($2.75) are so good, they should come with FDA warnings. I don't think I could dream up anything more perfect than the bourbon buttermilk pie – gooey and sticky sweet, with a hint of spice to warm it up, and a crust that is crisp and ample. The ancho-chocolate brownie pie is a sassy truffle in a tart shell, and the key lime pie is as zesty as Florida sunshine. The carrot cake ($1.75) is moist and creamy, and the brownie ($1.25) is fudgy and dense. Elaine, ya done good.