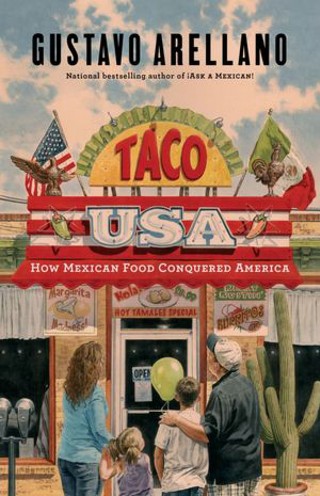 
With syndicated advice in nearly 40 papers, Gustavo Arellano, the brains behind the wildly successful "¡Ask a Mexican!" column, has a lot on his plate. But that doesn't mean this lifelong resident of Orange County doesn't have time to school his readers on the history and historical ramifications of one of America's tastiest and most taken-for-granted foods. In his latest book, Taco USA: How Mexican Food Conquered America, Arellano outlines the impact of a phenomenon that helped salsa displace ketchup as the nation's numero uno condiment.

The idea for this epicurean investigation came from Arellano's agent, who suggested – after hearing his client describe the food he was eating while in New York – that he write a book about Mexican cuisine. "I dismissed the idea at first, thinking someone had already written on the subject for a wide-scale audience; imagine my surprise when I discovered most of the history of Mexican food in the U.S. in the popular imagination was either false or half-true." Upon this realization, Arellano, who loves to "unearth hidden histories, to rescue the detritus of the past and give it its proper place in various narratives," knew he had a book.

Arellano's aims were, in the end, based around education as well as appetite. The man whose elucidations on Latino concerns have been spotlighted on shows like Nightline and The Colbert Report simply "wants people to learn about the long-neglected history of the genre, and to spread its gospel around. ... Oh, and to be as hungry as hell afterward and patronize their local taqueria or lonchería."

Cultural convictions aside, the research for this book was obviously satisfying. Arellano's favorite taco is the acorazado from Cuernavaca, which he describes as "fresh corn tortilla, a bed of rice, milanesa, and grilled jalapeños, onions, and cactus. Magnif­icent." But the puffy tacos of San Antonio and breakfast tacos of Austin, he asserts, "are wonderful, también!"

And, I've got to ask, because I've never been sure: Does the author of Taco USA consider a wrap a form of taco, or perhaps a form of burrito? "A wrap is a burrito," says Arellano. "It's OK, America!" (published May 4, 2012)