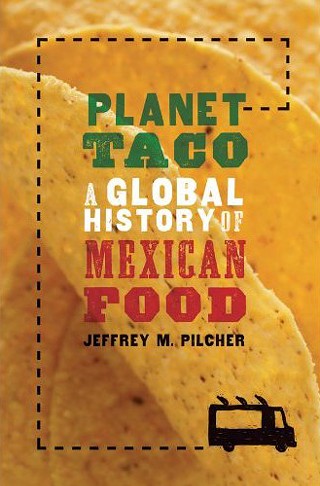 
In 1994, a film crew came to my unreconstructed farmhouse kitchen in Austin to make a TV commercial; in it, a cute blonde woman wearing tiny cutoffs joyfully prepared Mexican dishes for a party. However, the commercial was for Swedish television, and the food products – stiff taco shells, salsa, guacamole dip – were manufactured and marketed in Sweden. It was an interesting day, and my first clue that Mexican food had conquered the world.

In Planet Taco, Jeffrey Pilcher tackles the Herculean task of explaining how this phenomenon happened over time and what it has meant for Mexico and Mexicans (as well as for the rest of us). It's a complicated story and, as he says, "The history of tacos, like eating tacos, is a messy business."

Pilcher, professor of history at the University of Minnesota and author of ¡Que vivan los tamales!, has spent his career parsing the meaning of food and "authenticity" in Mexican culture. Here, he begins with the premise that Mexican cuisine was globalized from the time of the 16th century conquest, and that the outward-bound trajectories of Mesoamerican crops – corn, chiles, and chocolate – to Europe and beyond set the pattern for the later global embrace of Mexican food, particularly tacos.

This is no quick read for foodie fanatics who just love them some tacos; it's a dense study of food in culture that requires concentration to follow tacos from their Mexican origins to the Southwest borderlands to Americanization, industrialization, and finally, global production and marketing. From the 19th century streets of Mexico to the fusion-taco trucks of the millennium, Pilcher demonstrates "how the pursuit of culinary authenticity is embedded within complicated relations of race and class." For those willing to sign on for the ride, it's a fascinating gold mine of information – thoughtfully explained, usefully organized, and thoroughly documented. Eating a taco is eating history, indeed.