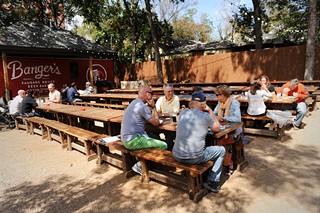 
Since opening just ten weeks ago, Banger's has quickly gained a loyal following in that sardine can of popular cocktail lounges known as the Rainey Street Historic District. Owner Ben Siegel struck liquid gold with his first-ever concept, which strives to deliver an unrivaled "American-style beer garden" experience for both your pint glass and your plate.

The playful atmosphere of the roomy, communal-seating pub provides a subtle balance to the serious sophistication of the offerings behind the bar, where Austin's largest tap system awaits with over 100 spouts. From hand-pumped traditional cask ales (currently tapping a (512) Pecan Porter) and gluten-free drafts (including ginger kombucha and hard ciders) to limited-release specialties (like Real Ale's barrel-aged Mysterium Verum) and bitter bombs for hops fetishists (Bear Repub­lic Racer 5 possibly topping that list), the Bang­er's drink menu reads like the manifesto of a genius turned madman obsessed with suds.

While you would be more than satisfied enjoying the bar's frequent special events and live music (keep your ear to the ground: Reliable sources speak of a huge-name ACL Fest after-show in the works) with just your friends and a carefully drawn glass of brew, it would be a mistake to ignore the eats. The menu's obvious focus on a very specific form of food – some 26 varieties of sausage – is no gimmick. Every recipe was crafted by in-house chefs to evoke the art form that is sausage making. International traditions are honored here, and vegetarians will find inviting choices, as well (beet and goat cheese; broccoli and cheddar). The real stars of the show, though, are the exotic offerings like a duck, bacon, and fig frank, and the specialty dishes, headlined by fried chicken sausage.