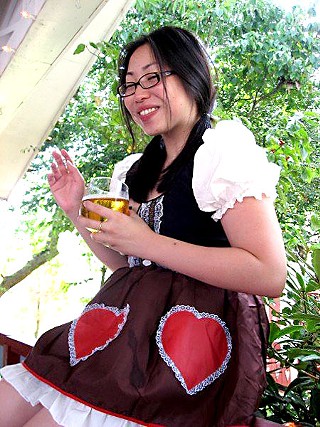 I am no beer snob, just as I am no water snob. I just need it to live – and lots of it to thrive.

Since I moved here three weeks ago from Athens, Ga. – a pint-size version of ATX – with my husband, an oft-homesick German national, I have been busy making this city our home. I don't mean homemaking like in the magazines. I mean finding our place, like my parents did when they came to America.

Here's how a drinker immigrates to Austin.

First: Get your bearings. I studied the mural of area breweries gracing Workhorse Bar's back patio (100 E. North Loop), but I needed details like "What part of Austin do I live in?" and "Where do I buy beer for the fridge, for lunch, or for breakfast?" Like a 1-up mushroom in Super Mario Bros., the new, free magazine Austin Beer Guide, chock full of maps, appeared in a housemate's car, and I jumped on it (www.austinbeerguide.com).

Second: Find people who speak your language. "That bald and bearded fellow at HOPE Farmers Market with a beer pull in his hand probably speaks beer," I thought – and he did. When Billy Murff, who was pouring free Adelbert's Philosophizer Saison, heard I was new to town, he intoned, "Watch out for Flying Monk." Is Flying Monk dangerous like a chupacabra or good-magical like a leprechaun? That's another article.

Third: Accept every invitation. We could have made the rain an excuse to stay in instead of meeting friends at Easy Tiger (709 E. Sixth), but we went, and re-emerged with a buzz and loaves of German bread under our arms. Bread and beer, beer and bread – and friends to share it with: Austin began to feel right that night.

I can't know what my Austin chapter holds, but I reckon I'll find plenty of people who speak my language.

Ivy Le, a new and thirsty Austinite, lived and wrote for the last 11 years in Georgia, but originally hails from Dallas. Follow her on Twitter @UrbanHaiku.