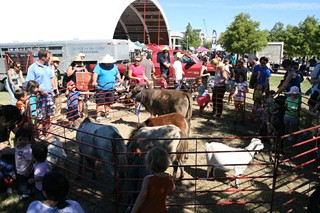 The new Mueller Farmers' Market is already a big hit with the neighborhood. Weather on the opening Sunday was glorious and the turnout was huge. "In Cedar Park, everyone comes by car, but here, it was amazing to look out at the gravel path and see hundreds of people approaching on foot and on bikes before we opened," exclaimed market manager Carla Jenkins. The historic hangar on the Mueller property provides a great cover for vendor booths, and it was indeed packed with families, dogs, and strollers when the market opened at 10am. Some vendors, like Cake & Spoon, sold out within the first hour, while Kitchen Pride Mushroom Farms and a few others had their stocks replenished more than once during the initial four-hour market.

I started the day with a coffee pop from Mom & Pops (perfect iced coffee on a stick!) and snagged a container of herbed Pure Luck Chèvre before escaping the crowd.

Responding to customer feedback from the first week, Jenkins made some adjustments for week two: reconfiguring the vendor booth locations to allow for wider aisles, making sure eager shoppers didn't block the striped areas next to handicapped parking spaces (a huge fine for motorists), and hiring a pedicab company to provide rides to and from distant parking lots. While the rain greatly reduced the early crowd on week two, there were still a good number of shoppers with double-wide strollers and dogs between 10-11am. New East Side Show Room chef Paul Hargrove was handing out tasty little bites, and the folks from Green Gate Farms brought a piglet for petting, much to the delight of small children and the consternation of several dogs. Speaking of which ...

As enthusiastic as I am about having a diverse and successful market in my neighborhood, both my Mueller experiences amounted to shopping for food in an indoor dog park. I love dogs and am genuinely happy that Austin is such a pet-friendly city, but from the lower vantage point of my scooter, I saw several dogs that were anxious and overstimulated by the crowd and the proximity of so many other unfamiliar dogs. In fact, there were some close calls that almost resulted in dog fights. While this is certainly a "first world" problem, I am genuinely concerned that a large number of dogs in the confined hangar space could be a potential disaster for the market. All it's going to take to put an end to a delightful addition to the community is for one person's precious dog to bite another shopper's precious child, and there will be lawsuits all around, resulting in a huge liability claim against the market. Dog owners, just because you can take your dog to the market doesn't necessarily mean you should. I'd like to suggest that you consider doing the humane thing for your dog and the responsible thing for the market, and leave the dog at home while you shop.

And please be aware that these concerns are my own, so outraged dog lovers can direct their hate mail to me rather than the market.

Plight in Flight
Can Austin save the migratory monarch by planting pit-stop snacks?