Jesse Griffiths' reputation as a devoted locavore chef and artisan butcher began to develop when he created the Dai Due Supper Club in 2006, offering seasonal supper club menus and a line of prepared foods based on local, sustainable ingredients. The supper club eventually evolved to include an online butcher shop with a popular retail outlet at the Sustainable Food Center's Downtown Farmers' Market on Saturday mornings. Now, Dai Due also offers fall and spring classes in hog butchery, and hunting camps for both men and women. After Grif­fiths was included in Marissa Gug­giana's Primal Cuts: Cooking with Amer­ica's Best Butchers (Welcome Books, $40), he and photographer Jody Horton secured a contract with the same publisher, and their book Afield (see review) comes out next week.

While I have always respected Griffiths' commitment to local foods, I was curious about what set him on that path. Was the whole locavore thing a gimmick to set himself apart from other chefs, or was it something more? I knew Jesse by reputation and as a semi-regular customer at his market stall (biscuits and sausage with cream gravy, poblano pimento cheese, and leaf lard for baking!), but it wasn't until we sat down to talk for this story that I discovered the mentors and cooking experiences behind his locavore lifestyle. In a profession rife with big egos and plenty of media grandstanding, Jesse Griffiths is an anti-celebrity chef. But if you happen to ask him the right questions, his eyes light up and he has no trouble describing the life experiences that inform his guiding culinary principles. Once I heard Jesse's fishing, travel, and hunting stories, the locavore label made all the sense in the world. This young man is the real deal.

Jesse Griffiths grew up in Denton, where, he says fondly, "[I] went fishing with my Dad almost from the time I could walk." Fishing would become his favorite recreational pastime and would provide one of the transformative experiences that set him on his current career path. "When I was a teenager, a friend and I went fishing one morning right after a cold front had blown through, and I caught a big crappie. I took it home, cleaned it, and cooked it for us; just fried some bacon and potatoes, and then the fish. Very simple, but so satisfying because I'd caught it and cooked it myself," he recalls. High school was also when Griffiths began working in restaurants, sometimes with as many as three different jobs at a time. He enrolled at the University of North Texas, but with no clear academic goals and a restless desire to be working and traveling, he left college behind and moved to Fort Worth for a wider variety of cooking jobs. In his restaurant jobs there, Jesse was often the only English-speaking person in the kitchen and "was quickly promoted beyond my capabilities," he says with a grin.

Wanderlust and a desire for different cooking jobs eventually brought Griffiths to Austin in the late Nineties. He landed a job working at Tokai, a situation he describes as one of the "luckiest things that ever happened to me." He learned everything he could from chef Tim Kartiganer, and moved up when Kartiganer moved on. It was around this time that Jesse picked up his first Chez Panisse cookbook and, like many a young chef, was inspired by Alice Waters to travel and explore European cooking experiences. He saved money and spent two weeks at a continuing education program in Chioggia, Italy, where he was exposed to an entirely new concept of cooking. "The time I spent there really changed my life," he says. "My brain was so stimulated every day, I couldn't sleep. They took such pride in the local ingredients and there was a complete lack of ego in the cooking process."

After the two-week intensive program, Griffiths secured a stage at the Boscolo Grand Hotel Dei Dogi in Venice. "We'd take a gondola to the fish market in the mornings and then the chef would do the most incredible, simple preparations with local fish, herbs, and vegetables. It was all about the best treatment of the ingredients, rather than having anything to prove with his cooking," Jesse recalls with admiration. Following up on an invitation from one of his classmates, Jesse then spent some time at El Meson Principal in Saltillo, Mexico, and was amazed at the elegant simplicity of delicious cabrito dishes based solely on native ingredients – baby goat, beans, onions, and chiles.

Returning to Austin, Griffiths landed at Jean-Luc's French Bistro, where he was mentored by chef Jean-Luc Salles and worked alongside pastry chef Sebastien Bon­neu, now the owner of Countryside Family Farm. Jesse's most vivid memory of working for the intense and often explosive French chef was an example of what he slyly calls "French encouragement." It seems Salles was yelling at him one day for wasting leek tops, but when Salles said, "When you have your own restaurant one day, you'll understand why this is so important," Griffiths heard the validation embedded in the chef's tirade. After Salles closed Jean-Luc's, Jesse invested in more European travel and then signed on for a four-year stint at Vespaio, where he lauds chef Ryan Samson as another important mentor. Working at Vespaio provided daily experience in artisan butchery and the preparation of salumi, in addition to the opportunity to meet the woman who would become his wife, Tamara Mayfield. "Tamara was delivering vegetables from Rain Lily Farm," he reports, "and we met checking in the produce."

The romance that blossomed over local produce led to a wedding for Griffiths and May­field. On their 10-week Europe­an honeymoon, the like-minded duo apprenticed at an organic farm in the Pyrenees, a cheese-making facility in the Basque country, a hostel in the south of France, and a farm on Corsica. They returned to Austin in 2006 with a clearer vision and put the puzzle pieces together to form Dai Due – basing the name of their company on part of an Italian maxim that translates to "from the two kingdoms of nature, choose food with care." Their first supper club served an all-local meal to 17 people at a facility called the Dragonfly House. The supper club idea proved viable and it wasn't long before Griffiths was able to leave his job at Vespaio and pursue his own business full-time. Jesse and Tamara work together at Dai Due, where their kitchen staff includes sous chefs Tabatha Stephens and Morgan Ange­lone. "Tabatha and I work so well together, she executes my vision. And Morgan is just fearless – whether it's butchering or hunting, she's always ready to go," he says with clear admiration.

A couple of years after Dai Due was up and running, Jesse began hunting, and that provided the final piece to the puzzle. "Loncito Cartwright invited me down to his ranch to hunt and I was hooked after I shot my first dove," he recalls. From doves he moved on to deer, duck, rabbits, and wild hogs, finding that, for him, the experience of hunting for food made the cooking of it that much more profound, harking back to the satisfying memory of cooking that first big crappie. The satisfaction he derived from adding hunting as a first step in the cooking process provided the inspiration for hog and deer butchering classes and, ultimately, to the annual hunting camps. "I'd really like to normalize hunting for men and women. It seems that in this country, hunting is much more associated with gun culture than food culture, and I'd like to change that," he explains.

Inviting his photographer friend Jody Horton along to document the hunts was the first step in the long process that ultimately produced their remarkable book, Afield. "We had these long conversations about hunting and cooking and making that accessible to more people, and the book grew out of those conversations," says Hor­ton. The desire to make hunting and fishing more accessible to women is reflected in the appearance of chef Morgan Angelone cleaning and filleting fish and game in the book. And this year, Dai Due is offering hunting camps for women, complete with female cooks and hunting guides. Griffiths is convinced that the same collegial, cooperative spirit created by female chefs in his kitchen will manifest itself in the field as well. "I like the idea of bringing that female energy into what's considered a male-dominated activity," he says. (Our Jessi Cape will be covering the ladies' hunt and we'll have more about that later in the fall.)

With Afield coming out this month, Grif­fiths has a full promotional schedule planned. He'll be teaching the Central Mar­ket circuit around Texas later this month, as well as cooking for a private reception honoring Michael Pollan. He'll be appearing at the Eat Real Festival in Oakland next week in conjunction with the Butcher's Guild conference, and at the Southern Food­ways Alliance Symposium on barbecue in Oxford, Miss., in October, as well as being the only local chef presented in the cookbook tent at the Texas Book Festival at the end of that month. And he's got some local events on the calendar for November that won't leave much time for hunting this fall. However, he did make it out for the opening day of dove season and bagged his limit, describing it "as a beautiful day." No gimmick there, just pure joy. 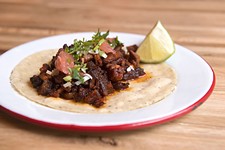