What EVOO Can Do for You

Extra virgin olive oil: how buying Texan could save your life Most Americans feel secure that when they buy a food product from a grocery shelf, the label on the outside genuinely describes what is on the inside. After all, there are laws, enforced laws about truth in labeling, especially of foodstuffs, aren't there?

Well, the answer is, it depends: on what you're buying, on the level of enforcement in your state of the laws that are on the books, and on whether the regulatory boards are writing standards with the consumer in mind. But there is one item on your grocery list that is being pressed, imported, bottled, and sold with virtually no regulation at all, and that item is extra virgin olive oil. Fraud is so rampant in the olive oil industry that scientists at UC Davis have concluded that roughly 69% of the extra virgin olive oil sold in the United States is adulterated or fraudulently labeled. In the most common fraudulent practice, extra virgin olive oil is blended with (or substituted with) low-grade olive oil chemically processed from olive-pressing wastes and overripe "ground fall" olives. (In the Mediterranean, this sort of oil is called lampante, or lamp oil. It is legally considered unfit for human consumption in the EU, but is legal here.)

A few brands that failed the UC Davis "extra virgin" chemical analysis: Bertolli, Colavita, Goya, Pompeian, Filippo Berio, Star, Rachael Ray, and New­man's Own Organics. In other words, a trusted name isn't enough. Food service and wholesale olive oil quality is in even worse disarray; most have been found to be largely seed oil such as canola, sunflower, and hazelnut oil, blended with small amounts of olive oil and chlorophyll to give it a greenish cast. While price is not a reliable indicator (there are expensive extra virgin olive oils out there that do not contain extra virgin olive oil), if you are paying less than $10 a gallon, it is very unlikely that you are buying oil made from olives at all.

Olive oil is in a unique position when it comes to government regulation, because 98% of the olive oil sold in this country is imported. Because there has not historically been a domestic industry to protect, there are literally no laws on the books to protect domestic olive oil producers or consumers. In the EU, the International Olive Council has implemented grades of olive oil and words to describe them, such as "extra virgin," "virgin," "pure," and even "olive oil;" but because the United States is not a member of the International Olive Council, these grades have absolutely no legal meaning in the U.S. They can be used by bottlers and importers on any grade of olive oil whatsoever. In 2010, the USDA updated the grades of olive oil, but (and this is a big but) on a purely voluntary basis, rendering the changes to recognized grades a legally empty gesture.

These facts about the shocking lack of standards led writer Tom Mueller to become a self-described "olive oil activist" after he researched and penned an article called "Slippery Business" for The New Yorker. Mueller found that in the Italian olive oil market, peddling fraudulent extra virgin olive oil (EVOO) was an incredibly lucrative activity. "Profits were comparable to cocaine trafficking," he wrote, "with none of the risks." He later expanded the article into a full-length book, Extra Virginity: The Sub­lime and Scandalous World of Olive Oil (see "Food for Thought: Summer Reading," June 1), and has since been traveling the world, bringing as much light as he can to the issue. Recently he served as the key­note speaker at the Texas Olive Oil Con­fer­ence, and was honored at the Con' Olio Olive Oil dinner at Fonda San Miguel (see Food blog, Aug. 26). In the wake of his speaking engagements and television and radio interviews, articles have appeared in many major newspapers about the flood of fraudulent EVOO into the American market. So far, they are isolated voices in the wilderness, and little has changed. At the same time that olive oil fraud has become epidemic, domestic consumption of olive oil has been skyrocketing, due to the popularity of what has come to be known as "the Mediterranean diet." Most of the health benefits of this popular diet are due to the consumption of extra virgin olive oil, which has amazing health properties that science is still struggling to catalog. EVOO is extremely high in antioxidants and organic compounds known as phenols, and it has been demonstrated to assist in cardiac health, help lower blood pressure, protect against certain common cancers, ease symptoms of ulcers and gastritis, lower gallstone formation, and lower the concentration of "bad" cholesterol in the blood. It's also anti-inflammatory, which is helpful for both heart health and all types of arthritis. Recent studies have also concluded that EVOO has a protective effect on bone density, slowing down bone loss in the aging and fostering healthy growth in children. The salient point here is, of course, you only get these benefits if you are consuming actual extra virgin olive oil.

How can you be sure you are actually getting the extra virgin olive oil that you pay for? Here in Austin, we are lucky enough to have several options: you can buy our domestic Texas-produced olive oil; you can buy from the Con' Olio olive oil tasting room; or you can go to Truth in Olive Oil's Buyers Guide (www.truthinoliveoil.com) to find other brands and retailers who have proven themselves to be above reproach.

Texas has fostered a tiny (but growing) olive oil industry of its own over the last decade, and all of the Texas-grown olive oils are the real thing: demonstrably extra virgin, high-quality olive oil. In fact, Texas growers are among the loudest voices calling for long-overdue truth-in-labeling regulation, and with good reason: Cheap, adulterated oils are a real threat to legitimate olive oil producers.

"The IOC in Madrid estimated that the cost of producing 500 ml of extra virgin olive oil is about $26," says Jack Dougherty, the owner of the first commercial olive orchard in Texas. Dougherty has over 1100 olive trees on his ranch in Wimberley, the first of which he planted in 1998. "That's including the costs of harvesting, pressing, bottling, and transporting. Obviously, you get a better value if you buy from a local grower with lower transport costs." Dough­erty's first pressing was in 2001, and like most Texas growers, he sells his First Texas Olive Oil online, to ranch visitors, and at farmers' markets.

At the present time there are around 12 commercial olive growers in Texas, the largest of which is Texas Olive Ranch out of Carrizo Springs. With an estimated 40,000 olive trees, Texas Olive Ranch is the olive oil you're most likely to find at your grocery store or farmers market. (It's the one with the redheaded cowgirl on the label.) Unlike Dougherty, who has full-size olive trees in a variety of cultivars, all of which are picked by hand, Texas Olive Ranch grows dwarf Arbequina olive trees that are mechanically harvested – but their oil is authentic extra virgin, and has won numerous awards for composition and flavor. This year alone, Texas Olive Ranch won four medals at the Los Angeles International Olive Oil Competition.

Texas Olive Ranch owners Jim and Karen Hen­ry hosted the 2012 Texas Olive Oil Con­fer­ence this summer in San Antonio. Although many aspects of olive growing were covered in the two-day conference, truth in olive oil labeling and meaningful and enforceable standards were a key focus. Jim Henry and other Texas and California olive producers are trying a double-pronged approach: first, drafting a federal marketing order to set quality standards, redefine grades, and require testing of all olive oils produced domestically (typically, once a domestic market­ing order is in place, foreign imports can be required to abide by it), and second, get the word out to consumers. 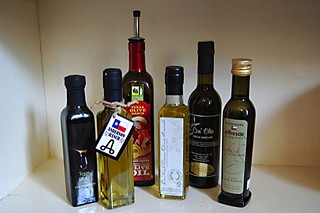 "Government regulation by itself won't get the job done," Henry explains. "Enforce­ment is a big problem for the FDA; they are ridiculously understaffed. It is key for the public to be informed what the real situation is. People don't like being lied to, being defrauded." The Texas Olive Oil Council is counting on public reaction to help fuel reform as well. "The media has a particular responsibility to spread the word," adds olive oil activist Tom Mueller. "Consumers need to be able to distinguish the real from the fake, or [else] bad oil, and the criminals who make it, could triumph."