The Celis brand is returning to Austin.

This is a very long story, and Austin newbies may not fully understand just how big it is.

In 1992, Pierre Celis moved to Austin. For local craft beer fans, this was akin to Robert Plant moving here. In the brewing world, Celis was a rock star. In the 1960s, the former milkman single-handedly saved the witbier (white wheat) style from extinction with his Hoegaarden Brewery. He influenced a generation of brewers here just as the craft brewing revolution was beginning, and showed a generation of Austin drinkers (such as myself) that microbrew meant more than Shiner Bock (back when Shiner could legitimately be called a microbrewery). In 1995, Celis sold 50% of the ownership to Miller Brewing, which either didn't understand what to do with a craft label or didn't care. In 2000, the brand was shuttered, and later sold to and revived by Michigan Brewing Company.

Now, the label is back in the Celis family. In June, Pierre's daughter Christine Celis announced that she's reacquired the rights to her family name and father's recipes, and plans to return the brewery to Austin. "It has been my personal dream and passion to carry on my father's legacy," Celis said in a press release. "After his death last year, we stepped up the intensity of our plans for a new brewery and re-acquiring the family name was the one thing we really needed to begin moving forward.

"We are receiving a phenomenal show of support from the brewing community," Celis continued. "I have been blown away by the wishes for success and the passion expressed for my father's achievements and our unique brewing style. When I called my mother in Belgium to share the news, she went completely silent and I realized she was overcome with emotion."

Celis says she's talking with investors about building a new brewery in Austin (the old one was on US 290 E. toward Manor), with plans to get on the market "as soon as possible." In the meantime, she'll be sending out updates at www.facebook.com/CelisBrewery and on Twitter @CelisBrewery.

• Another new brewery in Austin: Uncle Billy's Brew & Que brewers Amos Lowe (Barton Springs location), Brian Peters (Lake Travis location), and some other Uncle Billy's employees are leaving to start up something called the Austin Beer Garden Brewing Com­pany, to be located somewhere in South Austin. They'll be focused on craft beer and craft pizza. That's a big shift that ought to have ripples across the Austin brewing community – under their guidance, Uncle Billy's produced some Great American Beer Festival medal-winning brews. Filling the vacuum there will be Michael Waters, jumping from Independence Brewing. If you don't recognize Waters' name, you may recognize Lupulust, Epanoui, and Stash IPA – all brews that he had a hand in creating or reformulating.

• And yet another: the Whip In, already an iconic fixture in the Austin beer world (and surely the only combination convenience store/bar/Indian restaurant), is now brewing its own. I haven't yet made it down there to try their first offering (an IPA, natch), but Dipak Topiwala and company know good beer, so my expectations are high.

• And another: Bastrop Brewhouse, at 601 Chestnut in Bastrop, is set to open on Friday, Aug. 17, with some warm-up events before that. Get the details, a menu preview, and a look at the beers (including a heavy-hitting, 10% alcohol Lost Pines IPA) at www.bastropbrewhouse.com.

• New brewers have been springing up so fast around Austin that I almost can't keep up. So it was with shock and sadness that I heard of an actual brewery closure: Lovejoys, that wonderfully grungy taproom at 604 Neches, just off of Sixth Street, has gone out of business. Although I wasn't a regular – I got over Sixth Street a long time ago – I'll miss my once-a-year visit, when a friend hosted his "Meeting of the Wristbanded," an informal kickoff party for the first day of the music portion of SXSW.

• Lots of Austinites have come to the conclusion that Real Ale Brewing's Firemans 4 is the perfect summer beer – witness how the blonde ale quickly became the Blanco brewery's flagship brand since its introduction back in the mid-2000s. Now it will be even more so: Beginning this summer, Fireman's 4 is now available in cans. That means you can take it on the lake or river without fear of broken glass. Of course, Real Ale is not the only local craft brewer to take the leap into canning – both Austin Beerworks and Hops & Grain are can-only, and Rogness plans to do so soon. Of course, if you consider Shiner local, Bock and Blonde are also available. 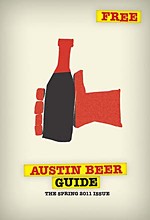