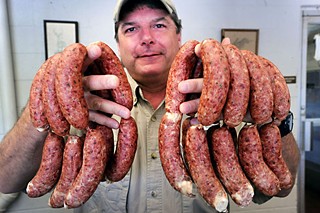 When we eat at some of the better local barbecue temples around town, we take serious note of any sausage that has that old-school taste: The sensory buds activate, we perk up, and we smile. It's this great taste that is disappearing as the flavor of sausage gets dumbed down for the lowest common consumer. Casings turn from natural hog gut to synthetics. The fat content, and thus the flavor, diminishes. Once-superb sausage makers admit to your face that they have "changed their flavor profile" because "people these days just thought it was too spicy or too greasy" or "that it had too much garlic." Sew my ears shut; I've heard it all.

Our sausage heritage here in Central Texas is decidedly Czech and German, with a little Polish thrown in. Those settlers from Eastern Europe brought with them their butchery traditions, their lust for many different types of traditional sausage, and their meat preservation technology in the form of smoking-sheds and pit smokers.

Back in the day, before refrigeration and the growth of hamburger chains, butchers made sausage from what was leftover once the monied customers had bought all of the steaks, the roasts, and the stew cuts. Every­thing remaining was ground up with some pork fat, seasoned aggressively, stuffed into a section of hog intestine, and smoked or grilled – the perfect marriage of cow and pig. The sweet kiss of the smoky wood not only added to the flavor profile, but it preserved the meat so that it lasted for days. Machinery was simple, so the grind tended to be coarse. This, dear reader, was the sausage of past dreams, the holy matrimony of meats. Today, it's in a sad state of affairs, but all is not lost: There are still some sausage producers in Austin that do it the right way – that hang on to tradition and make it the way they always have.

For history, none of the local folks can top Long Horn Meat Co., owned by siblings Bill and Janet Leach, fourth generation meat-market owners. Says Janet, "My great-grandfather owned two meat markets in Austin in the 1800s. After World War II, my father, William Leach, went into the cattle business, and then decided to go into the meat business, opening on I-35 in 1952. In 1969, freeway construction caused him to relocate to our current location. He decided to take a 10-year break, but in 1980 he felt the calling to return to the business, opening as Long Horn Meat Co."

Their recipe has deep roots, says Leach: "My great-grandfather sent his son to visit the World's Fair when he was a young man. And, when he was there, he got to know the German sausage makers and talked them into telling him how they made their sausage. He brought the recipe back with him, and it has been in our family since the 1800s."  Long Horn is an old-style meat market; its sausage is fresh, not smoked, and is available only to retail customers. "We make an old-style hot gut sausage in beef, pork-and-beef, pork, hot beef, beef with extra sage, and turkey. We do not smoke our sausage. You take it home and grill it yourself," says Leach.

Long Horn Meat Co. uses natural hog casing and takes pride in the coarse texture of its sausage. The family still uses the same blend of spices they did in the 1800s. Says Leach, "We are very old-school; we have some of the last of the old-style butchers and we still bring in carcass beef." Long Horn doesn't do any deer processing or custom sausage making, but that doesn't deter its popularity. "Sausage is very important, not only to our business, but also to our customers. They make a point to return to the old neighborhood to buy the sausage and other meats. On the recent Fourth of July holiday, people had to park two blocks away to get in."

Texas Sausage Co. got on my radar when I tried its sausage at two of my favorite BBQ joints: Franklin's and Live Oak. Owner Gary Tharp recounts the history: "My great-uncle Gene Christianson started this business in the Forties; back then it was called Acme Meat Co. This location was built in the Sixties, and then my great-uncle retired in the early Seventies and Bobby Hud­son bought it," says Tharp. (Austin sausage makers are an incestuous lot; Tharp also owned Johnny G's for a while.) 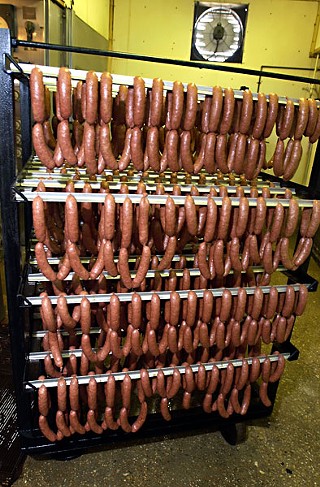 "We heard that Bobby was going to sell it, and my uncle and I got it in the Eighties. I originally learned how to make sausage from my father-in-law, making venison sausage during hunting season, but I didn't know anything about the big machines at the sausage company," Tharp admits. "We kept all of the employees, and they're the ones that taught me everything."

Texas Sausage Co. makes sausage for Sam's, Hoover's, and House Park BBQ, and does custom links for PoK-e-Jo's and Green Mes­quite, as well as Franklin's coarser-ground sausage. It has a retail counter up front but mostly does wholesale. During hunting season, it processes deer and can make custom batches as small as 25 pounds. Texas Sausage Co. produces fresh pork-and-beef and all-beef, as well as smoked pork-and-beef, jalapeño, Italian beef, and summer sausage. Tharp uses only natural casings, grinds medium-coarse, and smokes using hickory sawdust in a large smoking room. As Tharp puts it, "I do everything exactly how my great-uncle did: same recipes, same grinding plates, pretty much the same setup as he had in the Forties. We do it old-school, and I don't really pay any attention to any of this new stuff they do."

Smokey Denmark Sausage Co. was founded in 1964 by Albert C. "Smokey" Denmark. Smokey learned how to make sausage in Lockhart while working at Black's Barbecue, and in 1964 decided to start his own business, building the current location on East Fifth Street in 1970.  Smokey made beef and pork-and-beef sausages, both of which were well loved. In 1972, brothers-in-law Jim McMur­try and Cliff Laywell bought the company from Smokey when he retired, and in 1999 Jonathan and Melissa Pace purchased the Laywell family's ownership interest.

Jonathan came from a restaurant family, growing up in commercial kitchens, while Melissa has a knack for recipe development. They do game processing year-round and sell wholesale to distributors, as well as restaurants like Stubb's, Iron Works, Rudy's, Hillside Farmacy, Walton's, and many more. There's also a retail counter where anyone can come in and load up on the 23 different sausages they produce, as well as wieners, bacon, burger patties, and pit-smoked BBQ (brisket, pulled pork, ham, or turkey). All of their products are first-rate and delicious.

Smokey D uses a natural casing for all of its cooked and smoked sausages, and smokes with hickory, post oak, and pecan wood, using traditional smokehouse and pit-style smokers. It will do custom batches of 100 pounds, and its grind texture varies with the sausage styles. We particularly like the Hot Gut, the Original Hot, Smokey D's Hot Links, and the Smoked Pork and Beef. As Jonathan says, "I would consider us traditionalists."

Bobby Hudson first learned the trade as a butcher for the original Nighthawk restaurants, and then worked for the icehouse-barbecue joint that used to sit near the elementary school directly across Congress. He opened Hudson's Sausage Co. across the street in 1969. Over the years, he sold it, and it became Stewart's; then he bought it back in 2007. In the interim, Hudson owned Texas Sausage Co. for a long spell. Hudson's has cornered the local market in deer processing: It's the biggest deer processor in the area, and among the top 10 in the state, processing five- to six-thousand deer per year.

All of the 10 different styles of sausage that Hudson's produces are fully cooked, and smoked in a large roll-in smoker-room using a blend of hardwood sawdust. The casings are all-natural pork, and Hudson's leans toward a coarser grind, but its most popular barbecue style, the Classic BBQ Sausage, is medium-coarse. Hudson's sells sausage to several large, regional wholesalers and provides sausages to Railroad Bar­be­cue, Frank, and others (it also makes the Top Chop't steaks for the Frisco Shop).

Johnny "G" Gustafson has been a butcher all his life, working many years for the old Rylander's Grocery. He opened his original shop in 1980 on Ben White, and later moved to the current location on Manchaca Road. For the last 11 years, Grover Swift has owned it; last year, he was joined by his wife Jill (she's the one responsible for the wonderful samples and the great assortment of local food products). Johnny G's is known in the 'hood as a retail meat market, but they actually do 65% of their business selling wholesale to many area restaurants.

Grover makes 14 types of delicious sausages – fresh and smoked – including the popular Johnny G Hot Link, using Gustafson's original recipe. The smoked sausages are done out back in a smoking-room that uses hardwood and mesquite, and he only uses natural hog casings. Textures vary with the sausage, but coarse to medium-coarse predominates. He does a lot of deer processing during the season, and will do custom sausage batches of 25 pounds or larger. Grover has a great meat selection and can order in cabrito and whole pigs; he also carries fantastic fresh, young natural chicken grown in Weimer. Even at age 82, Johnny G still drops in, and the Butcher Block still makes everything his way. 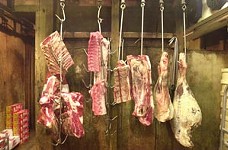