Restaurant Review: The Story Behind the Menu 
Newcomers to the Hill Top Cafe might be surprised to find a blackboard menu offering a mélange of Greek, Cajun/Creole, and down-home Texas dishes at a rural Texas roadhouse, but to anyone who knows the history of the place, that curious menu makes perfect sense. The story behind the menu is the heart and soul of the restaurant and a big part of what has made the cafe a Hill Country culinary attraction for just over 30 years. 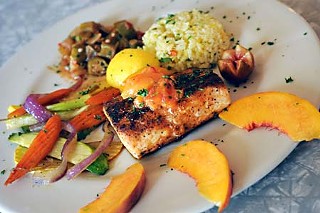 The son of Greek immigrants, bluesman Johnny Nicholas pursued a music career from the East Coast to Chicago, Louisiana, and finally Austin, where he joined Asleep at the Wheel in the late Seventies (see "Rembetika,"). Brenda Schlaudt is a descendant of German immigrants who settled near Fredericksburg in the second half of the 19th century. She grew up in Port Arthur, but spent her summers with her oma and opa on the family's ancestral ranch in the Hill Country. The Austin music scene brought Johnny and Brenda together. In 1980, the couple bought an old gas station roadhouse in the vicinity of that same ranch and turned it into the Hill Top Cafe, a home base for their family, Johnny's music, and Brenda's cooking. From the blues memorabilia on the walls to the music on the stage and the dishes on the blackboard menu, the restaurant reflects Johnny's ethnic heritage and musical talent, Brenda's deep Texas roots and cooking skills, and their shared affinity for the food of the Gulf Coast Cajun country.

When we visited on a recent Saturday, the cafe was in the capable hands of Johnny and Brenda's son, Willie John Nicholas, 28, who says he's been working around the family business since he was a little kid. He explained that while his mother still keeps an eye on things at the cafe, she also invests plenty of time in her other passion, gardening. Brenda's two big gardens, one at the restaurant and the other on the nearby family ranch, provide as much seasonal produce as possible for the menu. Our introduction to dishes sourced from the garden was a fried green tomato appetizer special ($10) dressed with fresh red tomato sauce and a sprinkle of melted cheese – a fresh bite of summer if ever there was one. Our next appetizer choice was Brenda's famous blue crab cakes ($16), two lightly sautéed patties of sweet crabmeat that are all meat and no filler, sitting on a tiny dollop of tangy beurre blanc sauce.

We certainly could have gone the light lunch salad route, as there are several worthy choices available, but other options beckoned. Head for the Gulf Coast with a bowl of the cafe's signature Port Arthur shrimp gumbo ($6 a cup), an inky dark roux and flavorful broth packed with plenty of shrimp. My friend paired the gumbo with the cafe's homage to the New Orleans muffaletta, a Blind Pig sandwich ($10 for half). This open faced behemoth sports a pile of thinly sliced ham, fresh tomatoes, olive oil, and herbs on slices of crisp-crusted muffaletta bread, under a thick mantle of melted, aged provolone. The half sandwich was more than enough for two people. It's hard to imagine how many people it would take to finish a whole one! My chicken fried steak ($16) was just as I remembered it from previous visits: tender, tasty beef in a crunchy, hand-breaded crust paired with sides of mashed potatoes, stewed fresh okra, and some well-spiced black beans topped with a little pico de gallo. The only thing missing was a big enough serving of gravy.

For years, Hill Top's desserts were made by an elderly neighbor lady referred to on the menu as "Miss Gladys" and they were a major attraction. We're told Miss Gladys has passed the dessert torch to another baker now, but you still shouldn't leave here without having dessert. My all-time favorite remains the blackberry pie ($8), sweet-tart fruit encased in an impossibly tender, flaky crust – served warm, under a melting scoop of Blue Bell ice cream. And the Italian cream cake ($8) is one of the best renditions of that Seventies mainstay that is ever likely to pass your lips.

To experience the entire Hill Top Cafe operation in all its glory, make reservations for their next special event coming up August 4. Steve Riley & the Mamou Playboys will play two shows (6:30-8pm, and 8:30pm-close) paired with a four-course dinner for $50, or $75 if you opt to stay all evening. The Hill Top Cafe is a distinctive slice of the Hill Country that you don't want to miss.