Whiskey of the Week: Fitch's Goat 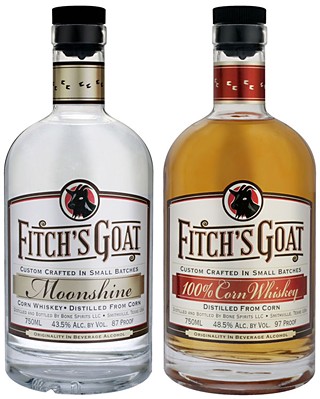 So I get this email from a PR professional: "Dear Wes, Can you feel the momentum? It's coming from Austin's newest spirits company, Bone Spirits. The farm-to-bottle distillery has just launched its second offering, Fitch's Goat Whiskey, within just a couple of months of debuting its first successful spirit, Smith's Premium Vodka."

Can I feel the momentum? All I can feel is, "Damn, another local distillery. Tito, what have you done to us?" But, it is close by in Smithville, and I try to pay attention to anything that's within a two-hour drive of Austin. Plus, the fact that they're using locally grown, organic corn as the mash is intriguing. When I checked the résumés of the owners, there was some serious experience and education. So I gave both of their whiskeys a try.

Both are just a touch hotter than usual because they have higher alcohol content. The primary difference between the two, other than price, is in their aromas. The Moonshine ($26) actually still smells a bit like corn, even after distillation. I happen to love corn, so it's a fragrance that I fancy. The Corn Whiskey ($36) has spent time in barrels and has a nice caramel color and vanilla aroma. If you take your whiskey neat, these differences will matter. If you mix it with, say, Coke, or blend it into a Missouri Mule, then go for the cheaper whiskey. But if you take some time searching for subtleties, comparing these two whiskeys will reward your efforts. And isn't it nice that we're getting them from a local company that cares enough about their product and our wellbeing that they're making everything from scratch and using organic ingredients. I'm impressed. Both are available at most Twin Liquors and Spec's stores. 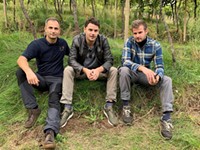