Hillside Farmacy has the potential to cure what's ailing you 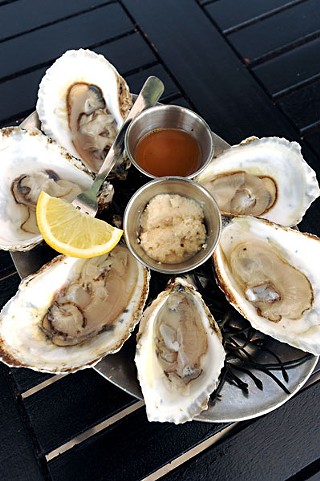 
Hillside Farmacy sits on the crest of East 11th overlooking Downtown – the top of the hill where it sits is both breezy and oddly quiet. The restaurant's atmosphere – I am tempted to say "art direction" – is superb: The building housed Austin's first black-owned pharmacy, and the antique wooden display cases, tin ceiling, and hex-tiled floor are all intact (and in some cases, restored) making Hillside Farmacy uniquely beautiful. The interiors were done by Mickie Spencer of East Side Show Room, who owns the restaurant along with chef Sonya Coté. The pharmaceutical theme is playfully carried over to the salt and pepper shakers and other accoutrements, and the display cases now house locally made foodstuffs, such as Sweetish Hill cookies, Zhi Teas, and Round Rock Honey. The outdoor patio is bordered with planters filled with herbs and flowers, and shaded by crisp new awnings and umbrellas. 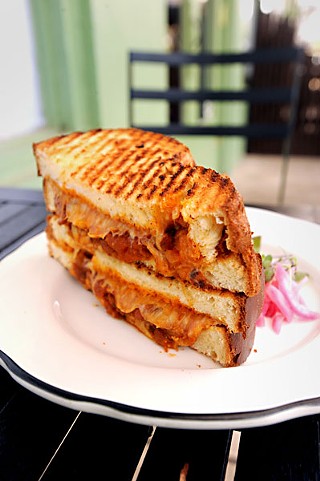 Initially envisioned as "a neighborhood grocery, deli, and bar" by chef Coté, the emphasis has shifted more to the restaurant/bar side in the months since Hillside opened. The grocery items are limited to bread, pastries, cold cuts and charcuterie, a few vegetables, and the local products in the showcases. The printed menu consists of salads, sandwiches, cheese and charcuterie plates – oysters on the half-shell and "peel your own" shrimp are available at all times. Coté, a self-described "oyster fanatic," introduced the Raw Bar to offset the fact that the kitchen is perhaps best described as "rudimentary"; happily, the oysters have turned out to be very popular.

The house salad ($6) was a robust plate of fresh baby lettuce, sweet cherry tomatoes, onion, and cucumber in a light vinaigrette. The soup of the day, tomato bisque ($5), was fresh and creamy, rich and mellow. The Dough Well Done Sandwich ($8) was enormous – made of soft challah bread filled with creamy melted cheese and fresh tomato slices. The Grinder ($11) is a traditional Italian sandwich of salami, ham, lettuce, tomato, onion, and pickled Italian peppers, served on crusty baguette.

Terms like "farm fresh" have been so abused by advertisers in this country that they have lost all meaning, but the produce and meats served at Hillside Farmacy genuinely are farm fresh, often picked at neighboring Eastside urban farms the very morning they are served. In all ways, the simple dishes on the menu are elevated by the exceedingly fresh, high quality ingredients that are used.

At both brunch and dinner, chef's specials showcase what is in season – usually three appetizers and two entrees, which are available as long as they last. The Oysters Rockefeller ($14), a plate of piping hot, fresh oysters topped with béchamel and golden breadcrumbs, and served with lemon slices and pickled onions, were exceptional. The pork belly ($18) was even more impressive: a perfectly roasted rectangle sitting in a puree of fresh sweet potatoes, topped with a crunchy slaw made from marinated, shaved fennel and carrots.

What with the cocktails and espresso drinks, the Raw Bar, the soda fountain, an ever-changing array of baked goods, plus chef's specials and a menu of sandwiches, salads, and breakfast items, Hillside Farmacy is attempting a great deal – yet everything I sampled was well made, indeed, often splendid. The one drawback is the service, which is oddly slow and betrays a lack of urgency on the part of the servers. While the staff appears friendly and well-meaning; they just don't seem to feel personally responsible for specific tasks, like filling beverages or delivering food. No doubt this problem will right itself as the "green" young staff becomes more seasoned.