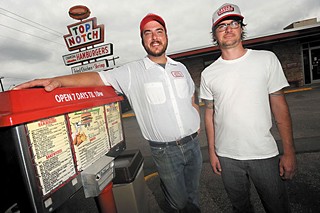 
Top Notch opened in 1971, when the city of Austin didn't extend very far past Ander­son Lane. North Anderson Lane at that time consisted mostly of fields of bluebonnets – I know because I was 10 years old in 1971, and I remember. (Other fun facts: gasoline was 18 cents a gallon in Austin in 1971, and a brand-new ranch-style house would set you back about $20,000.) Top Notch was the destination of choice during my high school years when the money we made at our after-school jobs was spent on the Longhorn Special with a side of fries. But here's the thing: It remained a destination of choice though college, young adulthood, marriage, and middle age because over the more than 40 years Top Notch has been in business, the quality has never faltered. Owned by Ray and Frances Stanish, Top Notch remained a family-owned business with a remarkably steady crew of loyal employees. Plus, the Stanish family was unwilling to cut corners; once, when a supplier downgraded their beef patties, the Stanishes searched tirelessly to find a new supplier – one who could match the quality of the previous product. They were never willing to let things slide into mediocrity.

After Ray Stanish's death in 2004 and their son James Ray's death in 2008, Francis decided to retire. But she wasn't willing to sell the business unless she could find a buyer who was willing to carry on "without changing anything." After all, the Stanish family had created an Austin institution deeply beloved by generations, in many ways a monument to the Stanish family values. There was no good reason to change anything. Fortunately, she was not alone in this assessment; she easily found buyers who felt the same way. Kelly Chappell, Jay Bunda, and Chris Courtney (owners of Galaxy and Zocalo cafes) teamed up with Phillip Santa Cruz to buy Top Notch, and it has been their pleasure to keep everything the way it has always been.

"One thing that has made it remarkably easy is that the Stanish family really took care of this place," says Santa Cruz. "It still has most of its original equipment! Ray had one of those handheld label-makers, and he labeled all the kitchen equipment with the date of purchase and the purchase price. Back then, things were made to last." Many of the longtime employees have been willing to stay on. Fifteen-year veteran Mike Fresch is still making the onion rings and the specialty sauces, and Chris Dantzler has ascended to assistant manager and right-hand man after 10 years over the grill. Janet Stanish-Knue stayed on for two years to help the new owners learn the Top Notch way of doing things. The iconic Seventies Texas barbed wire, bluebonnets, and roadrunner art still graces the dining room, and the menu items remain unchanged as well: hamburgers, fried chicken, fried seafood, sandwiches, shakes, fries, onion rings, and chicken-fried steak.

"We did add a few side dishes," admits Santa Cruz. "We now serve fried okra, mashed potatoes and gravy, tater tots, and green beans as sides. And we added lemon and peach fried pies to the apple and cherry that have always been served." There are a few other small changes: The restaurant is now open seven days a week. Once a month, a movie is projected onto an adjoining brick wall for drive-in night (Toy Story will be shown May 18), and now there's an urn of sweet tea as well as regular tea. "There used to be a sign that said "carhop closed," that the Stanishes used to put in the window if it was really slow or raining," Santa Cruz continues. "Janet Stanish wanted to keep that sign, so I guess the only other change is, the carhop is never closed now!"