Those Were The Days

Fond remembrances of a culinary giant 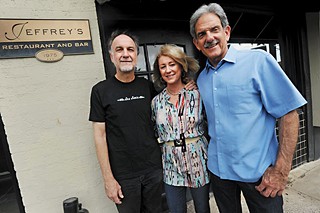 
Jeffrey's has been one of my all-time favorite Austin restaurants for its stellar 36-plus years and counting. Jeffrey's was Austin's wunderkind restaurant in the early days, then an overachieving teenager and finally the mentor and sage for all fine-dining Austin restaurants – now and to come. Such was the dream of visionary restaurateurs Peggy and Ron Weiss and namesake Jeffrey Weinberger. Now it will be rejuvenated under a new management and ownership team.

When I moved to Austin in the summer of 1972, my entrepreneurial cousin Bill Kunz was in the process of opening his Clarksville Cream Shop (now the site of the bar and southernmost dining room at Jeffrey's), scooping Blue Bell ice creams probably before anyone else outside of Brenham. A few years later, while I was sharing malts with Bill, he excitedly told me about the three UT friends that had returned from a vagabond vacation in Europe and planned to open a casual, continental restaurant next door, replete with fine food and wines.

Starting in the spring of 1982 – for nine years – I was fortunate enough to first be a "bus unit" and soon after, a waiter at Jeffrey's – for nearly 25% of my life at that time. Plus, this was also Waterloo Records' first nine years of existence. Certainly tip income from Jeffrey's helped me oftentimes forego any Waterloo income in order to buy more music inventory in those early lean years – "don't quit your night job, kid." Nor do I want to downplay the value of Jeffrey's management mentoring, crew camaraderie, and staff discount on utterly amazing food and wines – sometimes traded at Waterloo for great jazz CDs enjoyed nightly by Jeffrey's diners.

Thirty years ago, on countless Mondays, I was most fortunate to wait on the Chez Nous crew, led by Pascal, Sybil, and Robert, first for their music-and-movies fix at Water­loo, then at Jeffrey's for dinner ("More bread; bring more bread! We are French!"). Monday was Chez Nous' "dark" day, so Aus­tin's Parisian restaurateurs came to drink our wines and eat continental cuisine à la Jeffrey's week in and week out. The fact that other restaurateurs ate with us weekly said it all to me, more than all the power brokers, hippies, friends, lovers, celebrities, foodies, artists, millionaires, actors, students, politicians, professionals, blue-collars, tourists, musicians, retirees, writers, activists, families, etc., who wined and dined there nightly to celebrate a special occasion and/or a love of fine, fresh food expertly prepared with both talent and love.

Jeffrey's was first and always a tight-knit family thanks to the simply great vibe instilled by Ron, Peggy and Jeff. Sometimes before opening, I multitasked there both as waiter and staff uncle – chalking the daily blackboard menu while helping Peggy and Ron's daughter Chloe with her Mathews Elementary homework. Many Sunday nights (the "dark" night at Jeffrey's), lots of the crew would dine out to just hang together, enjoying the work of other fine restaurateurs that all frequented Jeffrey's. Plus, about one Wednesday a season, we had the best potluck lunches you could ever imagine, featuring Zelma's Southern-fried chicken. Zelma was a Clarksville matriarch who lived across the street. She adopted us one and all – and her fried chicken was heavenly, particularly when followed by Raymond's buttermilk pie. It was his mother's recipe, and I believe the only recipe he never tried to improve, because he knew excellence. You'd better bring the best dish you possibly could to that potluck, and we all did. I once brought my mom Dottie's lemon meringue pie, and she always beamed with pride that it was a major hit and frequent request back in the kitchen. Peggy's sister, Gayle Porter, was the one potluck exception. Gayle defiantly brought frozen peas and carrots every time, just to hear Zelma lovingly scream and holler, "Again, Gayle, frozen peas and carrots? You better not ever bring those again!"

Chef Emil, before Raymond, David Gar­rido, and Alma Alcocer-Thomas after – plus all the other chefs – carried on Jeffrey's nontraditional tradition that delighted, tempted, challenged, and satisfied diners with an ever-evolving and rapturous menu. I'm so elated that Larry McGuire and partners will be taking Jeffrey's to new heights in its next generation, with the love and guidance of its first. Like I said, Ron, Peggy, and Jeff are visionaries; this was all forseen – they just didn't know it.

My wife, Kathy Marcus, and I joined great friends that we've shared Jeffrey's dinners with for three decades now in a fabulous parting feast back in February – even though Kathy and I are now 99% vegan. As always, we requested to be seated in my favorite co-worker Johnny Guffy's section, where his humor and service rivals, and sometimes surpasses, the food. Now, none of us can wait for the big Viking kitchen remodel to be completed so we can again make Jeffery's reservations – in Johnny's section of course. "Mmm yum, ha-ha, mmm yum," as our "Buzzy" would say.

A few days later, Ron, Peggy, and Jeff, along with Larry, hosted 36-plus years' worth of Jeffrey's crews at a reunion celebration to die for. Absolute gems of stories were told or retold – depending on whether you were part of that crew, you lapped it, or you were lapped by it. They say a picture is worth ... so Andy Slack delivered a slide-show DVD, with help from Johnny and Peggy, that delighted one and all as they lingered at the bar savoring exquisite bites from Larry's upcoming kitchen. Many of us decided then and there that this reunion needs to become an annual affair – because this was the family we all chose to have, ah yes, and the feast, too. Long live Jeffrey's!

[Editor's note: John Kunz is the owner of Waterloo Records.] 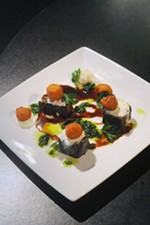