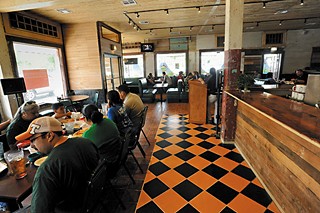 
La Reyna has been a neighborhood standby for more than 40 years, at one time second to none for authentic, homestyle Tex-Mex with a thriving on-site Mexican bakery. Opened by Vincente Hernandez in the early Seventies, La Reyna was renowned for its fresh tortillas, chicken mole, caldos, enchiladas, and calabacitas. In 1989, Mr. Her­nandez sold the bakery half of the business to the Beccera family, who moved operations down the street and renamed it La Mexicana Bakery. Once the bakery split off, La Reyna began to experience a slow, almost imperceptible decline. Over the next 20 years, the menu contracted as some of the more difficult items were discontinued, business dropped off a bit, competition became more intense, and Hernandez became less and less involved in the day-to-day running of the restaurant. Still, the salsa and iced tea remained excellent, and the enchiladas, Huevos Rancheros, and other staples were always consistent and reliable. La Reyna remained a neighborhood favorite, if not a citywide one.

Attempts were made over the years to bring La Reyna back to its glory days, but ultimately the restaurant was sold in 2011 to Yves and Atticus Macias, who, along with chef Marisela Godinez, had recently opened El Mesón on South Lamar. "Mr. Hernandez wanted to retire," explains chef Godinez. "But unlike most business owners around here, he wanted to sell not just the business, but the building. It was just too amazing an opportunity to pass up." With El Mesón so geographically close to La Reyna, Godinez and her partners decided not to make La Reyna another El Mesón location, but instead to try bringing La Reyna back to life. "We want to keep the same menu, just make the dishes with fresher, higher-quality ingredients," says Godinez. "Over the years, the kitchen had come to increasingly rely on canned goods: canned sauces, canned tomatoes, canned jalapeños. No more of that! Fresh ingredients from now on – fresh lime juice in the margaritas. But we want to keep it Tex-Mex, not Interior Mexican. Austin in still in love with Tex-Mex. And we want to keep it affordable."

So far, few changes have been made as the new owners have been struggling with renovating the building. Although they were under the impression that the building was the same Seventies vintage as the restaurant, they found instead a hidden gem of a building underneath all the molded plastic and Sheetrock. The original structure is a beautiful wooden-frame building from the early 20th century, and the Macias brothers had to revise all their design plans once they saw how lovely it was. For the time being, restoring the building has taken precedence over restoring the menu. "We had no idea what a jewel we had," laughs Godinez. "We want to stay with a funky South Austin feel and just leave the exposed wood and metal – it's beautiful. But we did put in entirely new bathrooms; the old ones were a nightmare."

Moving forward, they plan to add some more salads, fresh fish, shrimp, and steaks to the menu – and to bring back the La Reyna hamburger. "Only this time with grass-fed beef," says Godinez. "Eventually we hope to have a buffet on the weekends, too. But for right now, we are working with longtime neighborhood regulars to rework the recipes, and get everything tasting the way it should – the way it used to taste."