Fonda San Miguel continues to challenge itself and please its patrons 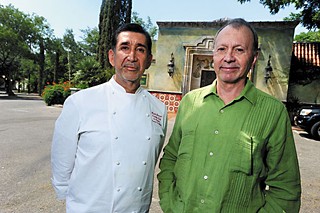 
When Tom Gilliland and Miguel Ravago opened Fonda San Miguel in 1975, they never thought their dream restaurant would flourish into one of the most beloved icons of the Austin dining scene. But thanks to their pioneering efforts, the regional foods of Mexico gained an increasingly loyal following, eventually expanding to other restaurants around Austin, the state, and the nation.

Gilliland and Ravago have hardly rested on their laurels, embracing change with open arms and adding new things to the Fonda repertoire. Just in time for the restaurant's 30th anniversary in 2005, Fonda underwent a full renovation. The lush courtyard was decked in handmade tiles by renowned Mexican ceramist Gorky Gon­zález and the walls were hand-painted with details by Jesús "Chucho" Moreno, while a rotating selection of paintings from Gilliland's impressive collection continues adorning the bar and dining rooms. Later that year, they celebrated the debut of an International Association of Culinary Professionals award-winning cookbook, Fonda San Miguel: 30 Years of Food & Art.

In late 2008, they got the project bug again, the result being the Fonda garden – which is now adjacent to the east side of the restaurant. Originally designed and installed by Randy Jewart of Resolution Gardens, the lovely space is now tended by Jeremy Wal­ther of BioGardener, who shifted the focus from intensive food growing to a mixed-use garden featuring ornamentals and herbs. In fact, all the mint for their tasty mojitos – their second most popular cocktail – comes from the garden. Two years ago, gardener and cookbook author Lucinda Hutson redesigned the landscape surrounding the building to include more native Texas plants, tropicals, and flowering plants. Fonda San Miguel is truly one of Austin's most beautiful and unique restaurants.

Ravago moved to Madrid four years ago, and since then, a number of talented chefs have taken turns running the show: award-winning chef and cookbook author Roberto Santibañez; Miz­ael Saucedo, now executive chef at Urban – An American Grill; Alma Alcocer-Thomas, previously the executive chef at Jeffrey's and currently the chef/owner of El Alma Cafe y Cantina on Barton Springs; and El Chile alum Jeff Mar­tinez. Ravago continues to remain involved, however, returning to Austin for three weeks every three months to make sure things are running smoothly. Today, the kitchen is in the capable hands of Oscar Alvarez, who has cooked at Fonda for 27 years (and at the James Beard House twice). "Our kitchen staff average tenure is 15 to 17 years," says Ravago. "They can cook the regular menu with their eyes closed." But Ravago and Gilliland also like to push the envelope a bit by adding seasonal off-menu specials. "It's challenging," says Gilliland in respect to making changes to the menu without alienating their legions of regular customers. "We don't like to stay stagnant, but we are careful. Sometimes we make a special and everyone loves it and wants to have it on the menu. But we can't grow the menu infinitely. Something would have to come off, and then we have to explain to someone why we took off the carne asada," he laughs.

Their latest project involves the building next door, formerly the QuickWash laundry. Gilliland and Ravago bought the property some six years ago with plans to develop it once the laundry's lease was up. The concept is not yet set in stone, but the duo is firm that it will not be Mexican. "It may have a Mexican accent," says Gilliland, but the new eatery will be totally different from Fonda. "It will have a comfortable atmosphere, European feel, and a clever look," says Ravago. Although architectural and design plans are done, there's no telling how long it will take to get through the city of Austin's red tape. "We are hoping for early next year, but who knows?" says Gilliland. "We are not in a rush, though." 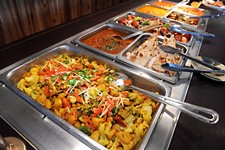 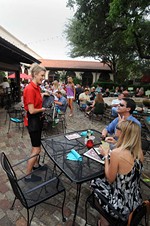