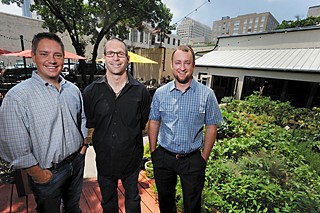 
A mainstay on Congress Avenue since 1983, Hickory Street Bar & Grill holds a place in many Austinites' hearts as the place where, as high-schoolers, they went for a special lunch after a school trip to see a play at the Paramount or a visit to the Capitol. For others, it was a great place to get the weekend started with $3 margaritas and a happy-hour-friendly patio. Some folks just really loved the dirt cheap all-you-can-eat salad, soup, and baked potato bar. That all went away in September 2011 when owner Colin McClelland announced that he would be shuttering the restaurant – effective immediately – upon the news that the property would be developed into a 28-story mixed-use high-rise.

Many mourned the loss of the Austin icon and saw it through its passage with a party on Oct. 1, 2011. But within a month, a group of young restaurateurs, headed by Brendan Puthoff, owner of Third Base sports bars and the Barcelona nightclub, had agreed to take over the space and reboot the concept. They had the keys to the building by Nov. 1, and in February 2012, after a thorough renovation and careful development of a thoughtful menu, Puthoff and his partners, Mason Wheeless and Nate Howry, reopened the restaurant. Hickory Street Bar & Grill – a place everyone knew was never going to win any culinary awards – is dead; long live Hickory Street, a farm-to-table concept emphasizing fast, fresh, locally sourced seasonal fare.

Vestiges of the old Hickory Street remain: the sense of a gathering place, a sunny patio that allows for ample people-watching and a view of the Austin skyline, a full bar, and happy hour specials. But that's where the similarities end. The first thing to go were the salad bars; in their place are a large, airy dining room and a counter where fresh-faced college girls attend the cash registers and pass out beepers to alert diners when their food is ready. Gone is the kitschy decor; in its place is a sleek, modern aesthetic with clean lines and muted cool greens and light browns. The soda fountain offers a half-dozen Maine Root sodas, and the patio features a vegetable and herb garden that chef Camden Stuerzenberger (formerly of Bess Bistro and Walton's Fancy & Staple) can draw inspiration and ingredients from for his menu – which changes on a monthly basis based on what's available from local farms.

So far, the most popular dishes on the new menu include a bison burger ($10), brisket tacos ($9), and catfish tacos ($9); the latter are generously portioned and topped with a light, crunchy cilantro and apple slaw that make for a not-too-heavy lunch. In addition to the seasonal fare, the Hickory Street's menu features a number of gluten-free items – including onion rings ($8) and fried chicken ($9) – in a nod to that other food trend people are talking about these days. "The old concept was old-school Austin, what you see is what you get," explains Wheeless. "I think we reflect what Austin is about now."

Luck Drops Lineup for March Reunion Potluck
Too Many Cooks in the Kitchen to feature local, national chef talent