Beer Flights: News on Austin Brews From Alpine to Munich

A roundup of local beer news 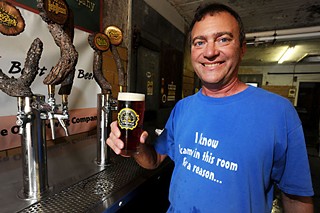 After 32 years in Austin and about a decade at Live Oak Brewing Company (and almost another decade before that at the late, lamented Waterloo Brewing), brewer Steve Ander­son is packing up for Alpine, out in West Texas, to start a new production brewery. "I'm there right now," Anderson said when I caught him on the phone last month. "I'm opening Big Bend Brewing. I'll have a 30-barrel brewhouse. Our flagship beer will be either a pilsner or helles named Tejas."

Why those styles? "It's beer for out here," Anderson says. "They're lagers. And it's hot and dry here. We'll also brew a hefeweizen and an IPA. Probably a porter and a bock later – but they may become year-round beers. We'll sell draft here in the region, and maybe in Austin, and we'll can."

But why Alpine? "I've been wanting to do this for about a dozen years," he says. "We visited out here and fell in love with the area. ... We've had a house in Sanderson for about 12 years, and now we have one in Alpine. I didn't say anything about these plans for a long time. It was just a pipe dream, but then this finally panned out. There's no stopping it now."

As for replacing him at Live Oak, owner Chip McElroy says the brewing duties are actually dispersed among three employees, so there's really not a "head brewer." As for losing Anderson: "Oh my gosh," McElroy says. "I hate to see him go, but he really loves West Texas. It's all for the good. I know he'll still be in our lives, though."

By now, I'm sure you've heard about the disaster that was the Austin Beer Festiv­al. I didn't go myself, but saw enough complaints online to clearly establish that the whole thing was a fiasco – substantiated by the organizers themselves issuing an apology, of sorts, on Facebook. The apology (www.facebook.com/theaustinbeerfest), presumably written by organizers Brent Villarreal and Greg School­field, complained, "To watch as arrogance, unprofessionalism, and unavoidable modifications made by others, slowly chew away at the most crucial of details in the idea is a feeling that is truly heart-shattering."

The heart of their complaint is that the only venue available when they began planning their March 31 festival was the Travis County Expo Center, which has an exclusive food and beverage contract with G&M Cater­ing – and that G&M's incompetence, along with a failed delivery by FedEx, sabotoged everything. G&M replied in an interview with CultureMap Austin that "We have never had any problems with the beer or food sales (at other events)." While the festival's description of events (and G&M's reply) suggests G&M perhaps didn't understand the nature of the event, one also has to wonder why the organizers didn't back out as soon as they realized they wouldn't have greater control over its operations. "This is now a legal matter, and we are dealing with it accordingly," says the fest's Facebook page.

The fallout was huge – another event, the Central Texas Beer Festival, decided to cancel its April 21 event at the Austin Music Hall, declaring that the ABF disaster "has contaminated the market for beer festivals." A reschedule has yet to be announced. Hopefully, that statement is only true in the short term – last fall's Texas Craft Brewers Festival (to be held again this year on Oct. 6) showed that beer fests in the Austin area can be done right.

My roundup of Hill Country brewpubs [see "Hops to It," April 6] inadvertently left out the Barber Shop, a great taproom in a funky old building in Dripping Springs. I visited the Barber Shop during my reporting for the story, and somehow just spaced out and forgot to include it in the article. I offer my huge apologies, and have added a review of the place to the online version of the article. Please read it. Or, better yet, drive out there and try it yourself.