April's rush of foodie events may be over, but May has even more in store

There was a whirlwind of culinary activity here in the ATX last week, and the furious pace continues into May, bringing plenty of news and more events. One of the hottest topics of conversation around the wine booths at both Live Fire and the Austin Food & Wine Festival was the eminent departure of longtime Becker Vineyards winemaker Russell Smith. Smith has purchased property in Spain that includes a vineyard, as well as olive and almond groves, and is moving there July 1. Our Wes Marshall considers Smith to be one of the best winemakers in Texas and says he can't wait to try the wines Smith makes from his own grapes.

Owners of Manuel's (310 Congress, 10201 Jollyville Rd.) and Chango's (3023 Guadalupe) have recently hired internationally known Mexi­can chef and winemaker Juan Jose Gomez as consulting chef for the company. Some of the changes made in recent months include the use of all-natural premium Black Angus Texas Beef, all-natural chicken and pork, wild-caught fish and shrimp, corn tortillas and corn chips made with non-GMO corn grown in East Texas, sustainably harvested tea blends from Austin's Zhi Tea, and eco-friendly, compostable to-go packaging.

The long-awaited Your Mom's Burger Bar in my neighborhood (5001 Airport) is finally open for takeout service. City permit issues have held this opening hostage for more than a month, and it could be a while longer before it can offer dine-in service.

Austin's women chefs are getting their share of national accolades lately. Sonya Coté, chef/owner of the East Side Show Room and Hillside Farmacy, has been recognized as one of the 15 Badass Women Chefs in America by The Daily Meal, where she's in the company of the country's most famous women chefs. La Condesa pastry chef Laura Sawicki was chosen as the Best New Pastry Chef by Food & Wine magazine earlier this spring and was feted with an issue launch party last week before the Austin Food & Wine Festival. Sawicki's milk chocolate pudding with whipped cream, cacao nibs, and blackberries was one of my favorite dishes at the Friday night tasting party.

Negotiations are ongoing for Austin City Lim­its stalwart Terry Lickona and a group of restaurateurs, including the Austin Java owners and Jeff Peterson, to convert Austin Java's City Hall street-level space on West Second into a restaurant and live-music venue called Lickona's. We'll keep you posted on developments. 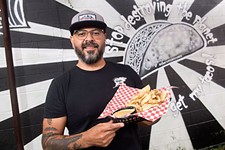 Seduced by Austin
Jesse Herman – hospitality pro, mover and shaker with the Austin Food & Wine Festival – is making his mark on his adopted town