Not yet baller status 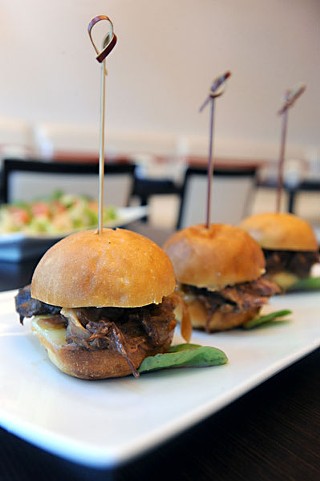 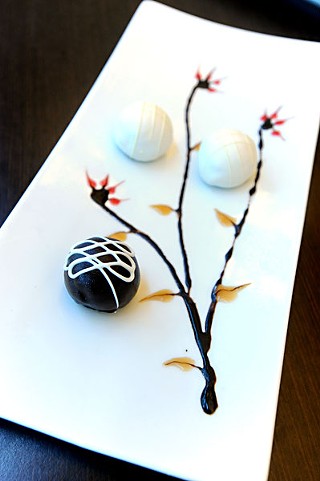 When the individual dessert craze evolved from cupcakes to cake balls towards the end of the last decade, Stacey Bridges and Ben May quickly cornered the local cake ball market with a delectable, exquisitely decorated product line. Based on the success of their online cake ball business, the talented duo soon expanded into a retail storefront, and in the late fall of 2011, they opened Austin Cake Ball Kitchen & Bar in a shady nook just west of Macy's in the Domain. The chic little eatery is sleek and understated, with a row of banquettes and small tables facing a row of gleaming pastry cases filled with enticing cake balls. The menu features appetizers, salads, entrées, soups, and desserts complemented by a well-chosen wine list, a selection of local craft beers in bottles, and a roster of custom cocktails. Based on my appreciation of Bridges and May's talents, and a positive experience at a preholiday soft opening party, I had high hopes for the concept. Two recent visits, however, have left me with concerns. The attractive space is inviting, and the cake balls are as beautiful as ever, but the training of the servers, the flavors of the food, and the timely execution of the menu all still appear to be works in progress.

Three friends joined me for a late weekday lunch at Austin Cake Ball recently. Most of the tables inside were taken when we arrived, so we opted for a table on the shady patio. That was when the trouble started. It took our harried server a while to greet us and clean off the table, and then there were long gaps between the arrival of our drinks and each subsequent course. Our server didn't bother to note which dishes had been ordered by which diners and didn't clear the dirty plates from one course before bringing the next. We had to ask for drink refills and silverware replacements, and even though we made a point of saying we would like spoons so we could share the desserts, none were forthcoming. (We finally scavenged them off a pre-set table inside.) This service debacle took two hours, start to finish, totally unacceptable for a weekday lunch. The kitchen seemed to be completely overwhelmed by a full dining room and patio (we've since learned that the restaurant was between chefs at that point), and our server appeared to lack the most basic training necessary to do his job effectively. Even worse than that, the attractively presented food was completely unremarkable; not bad, just $120 worth of unmemorable. When I polled my dining companions, none could name even one dish for which they would be eager to return, and unfortunately, neither could I.

I invited a different set of friends to meet me for a Tuesday happy hour, hoping to encounter a smaller crowd and better service. We were one of only two tables in the restaurant, and had a thoroughly enjoyable time over cocktails and girl talk. The happy hour menu prices encouraged us to make an early dinner out of small plates and cocktails. I have it on reliable authority that the Vesper ($6), the Ginger ($6), and the Old-Fashioned Lust ($9) were tasty, appropriately boozy, and not quite as sweet as the menu descriptions would lead one to believe. Once again, the food was artfully presented: warm short rib sliders on swordlike skewers ($8), dainty deviled eggs festooned with tiny microgreens ($5), bright red Peppadews stuffed with cheese on pools of tangy honey-balsamic syrup ($4), colorful servings of flavored hummus ($7), and a lovely artisanal cheese plate (from Antonelli's) garnished with fruit and honeycomb ($11). We topped it off with vanilla bean, lemon, and tiramisu cake balls ($2.95 each).

The meal was pleasant enough, and our server that evening was much more competent, although even she hadn't made note of which guest had ordered which cocktail. (Who ordered what is Basic Wait Service 101 – learn it!) Although we enjoyed our evening, I was left with the feeling that there's plenty of room for improvement here. Austin Cake Ball definitely gets points for style, but there are essential elements still missing. The kitchen has to be able to handle more than a couple of tables at a time, and the wait staff needs thorough and competent training. Most of all, all that pretty food really needs to pack more flavor: Truffled deviled eggs should have at least a hint of truffle flavor and aroma rather than simply tasting cold; the bland short rib sliders need a stronger savory component; crepes should not be filled with dry, tasteless chicken; red velvet cake batter coating on chicken is bizarre and unappealing; a tiramisu cake ball should have a little jolt of espresso in there somewhere. Honest­ly, I've eaten at Austin Cake Ball three times now, and the only flavors that made an impression on me were the stuffed Peppadews and the Fourme d'Ambert bleu on the cheese plate. Owner Ben May advised me this week that Austin Cake Ball's new chef David Griffin – former sous chef of Cafe 909 in Marble Falls, as well as Sterling Affairs – plans to implement a new summer menu in the next few weeks. Here's hoping chef Griffin can help Austin Cake Ball live up to its great potential.