Aside from a stellar vegetarian dish, Ramborger's bistro could use some tweaking 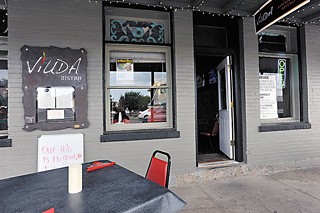 
The first thing you notice upon entering ViUDA is the silence, save for the clang and clatter from the kitchen. The next thing you notice is the number of people – both guests and staff – conversing in sign language. In fact, when the chef, Kurt Ramborger, visits the dining room, he, too, communicates in sign language; Ramborger, along with his kitchen staff and most of the front-of-house staff, is deaf.

Launched in July 2011 by Ramborger and co-managers Paul Rutowski (who is also deaf) and Rene Alcala, ViUDA shares a space with Helen's Casa Alde, a Mexican restaurant run by Alcala's mother in the same cozy spot on Buda's vintage Main Street for more than three decades. In addition to breaking ground as a restaurant with a deaf chef and management, the "new American" bistro situates itself narratively within its historical context: viuda is Spanish for "widow," a gesture to the building's former iteration as the Carrington Hotel, which was run by widows back when Buda still called itself Du Pre; these ephemeral vestiges are threaded through the menu as a way of rooting the innovations of the now with the nostalgic view of then. 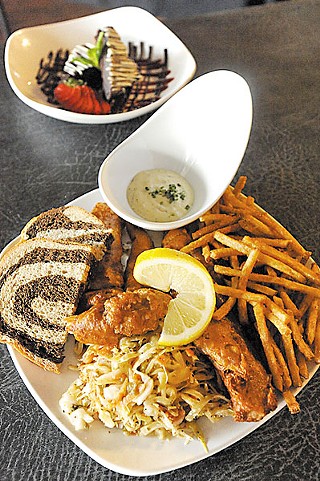 Contemporary innovations within the context of ViUDA comprise a mishmash of styles that, unfortunately, result in a tonal clash. The menu offers uncommon proteins like yak and salmon burgers, but the five televisions and ceiling-fan lighting undermine the restaurant's rhetorical gestures toward elegance. A trip to the restroom reveals the chef and his two assistants hunched over a microscopic workspace; one wrong move, and a clumsy diner could upset a precariously situated mise en place or glimpse her meal cooling in the pass-through. When there is no curtain behind which the wizard can hide, the dining experience can be a bit disorienting.

The food itself is equally uneven. Starters include the formaggio crostini ($6), which is fairly straightforward: four baguette slices are each topped with a different cheese (Monterey Jack, mozzarella, Parmesan, feta) and served with an enormous bulb of soft, buttery roasted garlic perfect for spreading on the otherwise nondescript appetizer. The Flapper Bandits ($10) are a gussied-up version of Buffalo wings, sans the wings. Six plump French-cut drumsticks are drenched in one of a half-dozen sauces (we opted for the "Buffalo hot") and nestled elegantly on a long white plate with a sleek boat of chunky bleu cheese dressing. The drumsticks were appropriately sauced and quite flavorful.

The entrée portion of the menu is where Ramborger really flexes his creativity. There are yak burgers and steaks, deep-fried pheasant, and a nightly special called the Corruption. The yak burger ($10), cooked medium-rare to order, came out lukewarm and was quite dry and dense. While the flavor was nice, with a gamey bite that presented almost as spicy, it took on an unpleasant texture as the burger cooled, and nearly half of it went uneaten. Less problematic was the Shiner Bock fish fry ($11), which adds a Texan twist to the traditional Friday fish plate. The pollock was velvety and flaky, but the breading was excessively greasy. The Tejas slaw was the surprise star of this dish, starting off cool and crisp and finishing with an irreverent kick of jalapeño. On the night of our most recent visit, the chef's special was a shredded boar sandwich on a croissant; it was tasty enough, but reminiscent of extremely dry barbecue brisket.

The most successful dish on the menu is the Veggie Delight ($12), a triumph of ingenuity that will bring a tear to the eye of the vegetarian diner who is sick of assembling a meal out of meatless sides. A crispy, nutty quinoa cake rests in a pool of cool mint vinaigrette and is topped with sautéed portabella mushrooms, thinly sliced beet carpaccio, and two generous slabs of breaded and seared creamy tofu. The complexity of flavors, temperatures, and textures was a welcome surprise in light of most restaurants' lazy gestures toward vegetarians on their menus. If the meat and game dishes on ViUDA's menu were executed as skillfully as this stack of plants and grain, Ramborger and his staff would be cooking for a full house in their own space six nights a week.

On the whole, ViUDA is a restaurant with a lot of potential to serve really interesting and groundbreaking food. While chef Ramborger's bold personality shines on the menu, the execution could use some tweaking. Beyond the food, he and his business partners need to fine-tune the story they want to tell with this restaurant. If they want to sell their patrons on an elegant and creative dining experience, they need to turn off the televisions and turn their attention to the finer details of service and ambience. 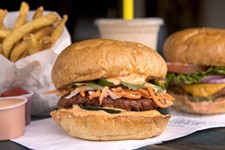