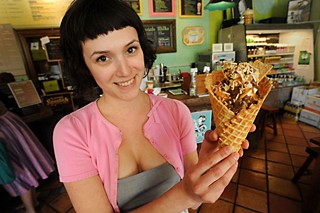 Back when I was in high school, I abruptly quit meat when my stepfather brought in the foreleg of a deer he'd been field-dressing in our backyard and placed it on the kitchen counter. After that, even though I was working long hours at the Salt Lick and would often be starving at the end of a shift, the image of that deer leg and the accompanying gut-punch of revulsion would pop into my mind and I would satisfy my appetite with potato salad or peach cobbler rather than a plate of brisket.

Sure, it wasn't the healthiest regimen, and my undergraduate meal plan included a lot of instant ramen noodles with added broccoli, bean and cheese burritos from Taco Bell, and Fritos with French onion dip. After college, I graduated to Boca burgers and Morningstar Farms' faux corn dogs and chicken nuggets until finally doing a spectacular swan dive off the vegetarian wagon into the loving embrace of a bacon cheeseburger. I've never really looked back since that fateful trip to Hut's, although my attitudes toward meat have evolved and taken on varying shades of gray as I have read and researched and written about the state of modern American meat, an evolution that mirrors that of countless others like me.

Indeed, meat is quickly being relegated to the outer edges of the American dinner plate: According to the USDA, we will consume about 12% less meat (including poultry) as a nation in 2012 than we did just five years ago. In ten years, we have gone from "Beef: It's what's for dinner" to "Beef: Eh, no thanks." Meanwhile, as consumption of cow's milk has declined by about 17% since 1994, sales of plant-based milks like soy and almond milk exceeded the $1 billion mark in 2011.

What's behind the recent decline in Amer­i­cans' consumption of meat and other animal products? Perhaps it's people like Eric Schlosser (Fast Food Nation), Morgan Spur­lock (Super Size Me), and Michael Pollan (The Omnivore's Dilemma, In Defense of Food) who, through their investigations into the landscape of fast food, meat production, and government subsidies of commodity crops have given consumers pause when making their meal plans. There is certainly the concern for animal rights. Perhaps the rate of heart disease has shot up so dramatically that doctors are recommending that their patients cut out meat for health reasons. Maybe people have realized that industrial meat (as opposed to ethically raised, grass-fed, non-Concentrated Animal Feeding Operation meat) is poisoning our land, our air, and our bodies and are simply saying, "Enough."

For Austinites who have arrived at the point of "enough" but aren't really sure where to start when it comes to incorporating more plants into their diets, two upcoming events provide the opportunity to explore the possibilities of plant-based eating and sample the wealth of vegetarian and vegan resources and products available.

With the Farms 2 Forks immersion weekend, participants will take a cold-turkey approach to quitting meat with Rip Essel­styn, former Austin firefighter and author of The Engine 2 Diet, as their guide. Essel­styn, who eschewed meat products in favor of a healthier diet as a professional triathlete in the Eighties and Nineties, developed the plant-based, low-fat Engine 2 plan when he discovered that his fellow firefighters had shockingly high cholesterol levels. A 2006 pilot study of the diet conducted among more than 50 volunteers found that after six weeks, participants saw significant decreases in body weight and cholesterol levels, as well as other ancillary physical benefits. Since the publication of The Engine 2 Diet in 2009, the book has maintained brisk sales (it's currently ranked at No. 115 among Amazon bestsellers) and a line of Engine 2 products will soon populate the shelves at Whole Foods Market, including the excellent Rip's Big Bowl cereal, currently only available in the bulk aisles.

Because Engine 2 dovetails nicely with the documentary Forks Over Knives, which demonstrated in no uncertain terms the health benefits of a plant-based diet, Essel­styn and the producers of that film have teamed up for four immersion weekends scheduled to take place across the country. As part of the inaugural immersion weekend, approximately 220 participants will gather at Boggy Creek Farm in East Austin for three plant-based meals per day and a series of seminars concerned with making the connections between food and health, as well as between food and its origins. For example, Esselstyn's father, Dr. Caldwell Esselstyn Jr., will speak about preventing and reversing heart disease while Carol Ann Sayles of Boggy Creek Farm will lead attendees on a tour of the farm as a demonstration of the connections between the farm and the fork.

Those without immediate medical concerns who are interested in cleaning up their diets might be intimidated by Engine 2's seemingly extreme eating plan. There's no olive oil, no sugar, and very little fat. Such a dramatic shift can be daunting for someone who enjoys her carrots with a generous dollop of Ranch dressing or simply can't live without that plate of tender barbecue brisket.

"Is it extreme, or is it extremely necessary?" asks Esselstyn, folded into a club chair in his cavernous office at Whole Foods headquarters. "It can be daunting if you're used to eating and cooking a certain way for 30 to 40 years of your life. If you want to learn Spanish, what do you do? You go to Spain or Mexico and you just do it and in two or three months you're amazed at what you've learned. This is like a piece of kale compared to learning a new language."

For Esselstyn, Engine 2 is a language in and of itself in that he prefers the term "plant strong" over the more ideologically loaded "vegan." Plus, he says, you can be a vegan and still eat crap. "Plant strong," on the other hand, suggests health and vitality with scrupulous eating at their core. "We're plant weak; if we get plant strong, you can turn your health around and turn around the health of this country. We can do it in a matter of five years, but it has to become a value that we cherish in this country. Right now, if you're the one eating healthfully, you're the outlier."

Indeed, even as it creeps into mainstream parlance, the word "vegan" possesses a certain ideological valence accompanied by the image of self-righteous, fussy, tofu-eating hippies. "Vegan is an important ethical stance," explains Isa Chandra Moskowitz, the founder of the Post Punk Kitchen. "It's got meaning behind it that isn't necessarily about being healthy. The health thing is great, and it is important to be educated about being healthy as a vegan. But it's still important to say, 'I'm vegan because I believe in animal rights and it's my ethical stance.' I think there's this need to not say that out of fear of what people's reaction will be. Whereas saying, 'I'm vegan for my health' isn't threatening to people. Vegan­ism is not a weight-loss diet."

Moskowitz, with Terry Hope Romero, has published a number of vegan cookbooks under the aegis of the PPK, including Vegan Cupcakes Take Over the World (2006), Veg­a­nomicon: The Ultimate Vegan Cookbook (2007), and Vegan Pie in the Sky (2011). Both Moskowitz and Romero are among the presenters at the first annual Texas VegFest, a family-friendly event for those folks interested in incorporating more plant-based eating into their lives. In addition to Moskowitz's cooking demonstration focused on vegan mac and cheese and barbecued tempeh ("it's a Brooklyn Jewish take on Texas food," she says) and Romero's tamale-making demonstration, attendees can enjoy live music, presentations on the health benefits of eating less meat and advocating for more vegan food in local restaurants, as well as educational programming aimed at children.

"Our event is trying to get people to be more aware of eating less meat," says Angela Ramsammy, executive director of Texas VegFest. "You can have delicious vegan cupcakes, meatless hotdogs ... you can have whatever and maybe make some choices after VegFest about incorporating more plant-based foods, for whatever your reason is. I would love it if 100 people walked away from VegFest determined to eat less meat [rather] than one person giving up all meat. I think there's more of an impact with a lot of people doing a little."

In fact, if the success of Engine 2 and the Meatless Monday campaign are any indicator, plant-based eating's moment is now, and there is no better place than Austin to dip a carnivorous toe into meatless waters.

"There are barbecue places where you can get veggie burgers and sides that don't have any meat in it. In Austin, it feels natural," insists Ramsammy. "I can get everything from pineapple parsley juice to vegan doughnuts. I don't feel like I'm missing out on anything."

Indeed, there is a powerful argument being made around these parts for vegan food that is also pleasurable, and maybe even a bit naughty. In addition to local treats like Wheatsville's popcorn tofu and Red Rabbit vegan donuts, one look at the food vendor list for Texas VegFest lays bare the argument that plants do make good food, from the meatless curries of Bombay Express to vegan queso courtesy of Food for Lovers to a Freeto Burrito from the Vegan Yacht. For dessert, there are pastries from the Capital City Bakery (for a profile of proprietress Kristen Davenport, see "Cottage Industries," Nov. 25, 2011), as well as vegan salted-caramel ice cream from Sweet Ritual.

Incorporating more plants into your diet might change your life, or it might just change your weekly meal plan a little bit, but there's never been a better time to explore the possibilities. Come on in, the water's fine.