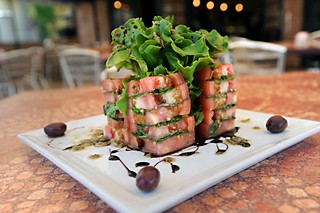 
I had a definite déjà vu moment when I entered the patio at Russell's Bistro to attend the Chocolate Divino launch party recently. I had worked in this particular building years ago when it was home to Bob Lowe's Galleria restaurant, known for continental cuisine, good coffee from Anderson's Coffee next door, and a wine list featuring some of those upstart California (gasp!) wines that were just beginning to attract attention. The little jewel box has always been one of my favorite local restaurant spaces, but it has changed hands several times in the 30 years since those Galleria days. One operator after another would strive to find a format that could regularly attract enough of the neighborhood clientele to make a small restaurant (35-40 seats with about the same number on a seasonal patio) financially viable over the long term. Bakery owners Russell Millner and Alan Kirkhart took over the space four years ago and set about turning it into a genuine neighborhood treasure. They appear to have come up with just the right balance of early morning coffee and pastries, familiar and consistent menu items at an accessible price point throughout the day, and special events and community involvement to make their clientele feel personally invested in the restaurant. On my two recent visits, the bistro's welcoming atmosphere and popularity were evident, but the kitchen timing and table service still need some fine-tuning.

Our group of six was seated for brunch at 12:45pm on a recent Sunday when just about every table in the bistro and the patio were filled. Our server took drink orders and we waited 15 minutes for coffees. Guests at our table who ordered coffee with cream got no spoons with which to stir. Tea and water glasses were slow to be refilled over the course of our meal, and when coffees were refilled, no cream refills were offered. Once our entrées were ordered, we waited 45 minutes for food and then our server could not remember which dishes went where. It was a perfectly pleasant meal of well-prepared varieties of eggs Benedict, smoked salmon ($12), excellent crab cakes ($15), and beef fillet medallions ($17) topped with perfectly poached eggs and a mild hollandaise. When our entrées arrived, we asked for an order of crème brûlée French toast ($9) for the table to be split as a dessert. It arrived 30 minutes later with several small plates but no knife with which to cut it up. The French toast was our only culinary disappointment that day because there was no discernable crème brûlée aspect to the dish. The croissant pieces did not look or taste as though they'd been dipped in a custard batter and sautéed or baked, just sprinkled with sugar and browned with a torch. We left the restaurant at 2:45pm. While the meal was mostly fine and we certainly enjoyed one another's company, better time management in the kitchen and attention to detail on the floor would have gotten us out of there in less time.

Another friend joined me for an early dinner on a Tuesday evening. When we arrived, a few couples were ordering dinner, a private party was just getting started on the patio, two moms were finishing up a meal with their toddlers, a woman was working on her laptop at a table near the window, and a group of six was assembling to play mahjongg. Everyone looked comfortable and very much at home. That evening, we chose appetizers, entrées, and desserts and found all of them to our liking. The crab cake appetizer ($8) offers one plump and meaty orb in a pool of beurre blanc sauce. The shrimp-and-scallop brochette ($9) features skewers of two small, garlic-marinated shrimp and scallops paired with a strip of jalapeño pepper, wrapped in bacon and kissed by the grill – just the right bites to whet the appetite. For entrées, we chose the prime rib dinner special ($24) and beef tips in a sauce of red wine and mushrooms ($17). The beautifully marbled slice of prime rib was deliciously medium-rare, and the beef tips were flavorful and well-matched with hearty mashed potatoes. We figured the mac and cheese ($7) was probably the most kid-friendly dish on the menu and found it mild enough to entice the pickiest little eater, but rich and creamy enough to tempt Mom and Dad. Both the mocha torte with crème anglaise ($6) and the crème brûlée bread pudding ($6) were elegant and satisfying, one offering a cool, intense dark-chocolate experience, and the other warm and soulful under a crown of crunchy pecans and caramel syrup. If those items offer no allure, the full pastry case surely will.

The service on our second visit was better in the sense that our server was sensitive to the fact that we were having a gabfest and didn't want to be bothered, but details such as refilling iced tea and or bringing more hot water and tea bags for hot tea still fell through the cracks. For a restaurateur as service-minded as Millner, fine-tuning service problems should be an easy fix once his staff realizes the more attention they pay to the little details, the better money they'll make. After dinner, Millner stopped at our table and shared the news that the bistro's patio will be covered with a high-ceilinged glass solarium later this spring; it will have sliding glass doors that can be open during pleasant weather and can be heated and air-conditioned, stabilizing the restaurant's seating capacity year round. That's great news for the bottom line as long as the kitchen can keep up with the demand. I'm predicting that Russell's Bistro will have a long and successful tenure in Jefferson Square. It's the kind of place where guests can feel right at home at least once a week.