Celebrity chef sightings were the Austin culinary equivalent of Where's Waldo last week as excited local chefs and eager fans speculated about which restaurant or food truck might be anointed next. We've heard there were plenty of tacos consumed, that Tom Colicchio dined at Foreign & Domestic, that Anthony Bourdain swooned over the barbecue at Franklin and JMueller BBQ (no surprise), and that he and his crew missed some toothsome pork cheeks at 3 Little Pigs due to a communication snafu. We've also heard that blogger Daniel Vaughn of Full Custom Gospel BBQ is doing a book for Bourdain's personal imprint with his publisher later this year that should be a necessary purchase for Texas barbecue lovers. Naturally, we're eager to see if more Austin chefs might compete on Top Chef or which Austin dining destinations might show up on No Reservations. No word on when or whether an Austin or Texas barbecue-themed show might make it into that lineup, but we can tell you that the segment of Diners, Drive-Ins and Dives filmed at Luke's Inside Out a while back will air on the Food Network at 9pm on April 9.

This week's lightning round of restaurant news: Lux Bakery & Cafe (3601 W. William Cannon) owners Tim and Ann Lux will throw a final party before closing the store on April 7... Estâncía Churrascaría on Highway 290 West has closed, but the new Arboretum location remains open... Austin's go-to spot for baking and sugar art supplies, Make It Sweet (9070 Research #203), has greatly expanded retail and teaching space now that it's settled into the Crossroads Shopping Center... The popular Bruegger's bakery and cafe chain now has a locally owned outlet at 3267 Bee Caves Rd. in West Lake Hills; the owners are planning a benefit for the Westlake High PTA sometime in April... The bánh mì Vietnamese street sandwich and flex-casual service model at Austin's homegrown chain MaMa Fu's Asian House (various locations) have garnered the company a Menu Trendsetter Award, to be presented at the Menu Masters ceremony hosted by Nation's Restaurant News in May... The operators of local Krispy Kreme shops are soliciting nominations for the Krispy Kreme Teacher of the Year Program from public and private schools in Austin and San Marcos. Three winners in each city will be awarded cash prizes, as well as money for their schools. Teachers must be nominated by April 1 by someone from their schools, such as a student, parent, fellow teacher, or administrator, with forms available in the stores or at www.krispykremetexas.com.

The second annual Foodways Texas Sym­pos­ium takes place in Austin, March 23-25, and tickets are still available. The theme of this year's meeting is Texas Preserved, and panel discussions at the Blanton Museum will address the canning and preserving of Texas foods, oral history projects on craft breweries and iconic Texas restaurants, and food photography as a preservation medium. The weekend will also feature five meals presented by Texas chefs in such locations as Fiesta Gardens, Boggy Creek Farm, and Hoover's Soular Food Garden. Details and tickets at www.foodwaystexas.com. See you there. 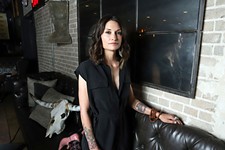 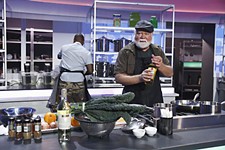 Who's That Guy on the TV Set? That's Not the Don I Know!
Winemaker Don Pullum samples 'The Taste'

The Tipping Point
By raising menu prices and eliminating gratuity, restaurateurs hope they've found the recipe for a better quality of life for staff