Welcome to the craft-beer capital of Texas 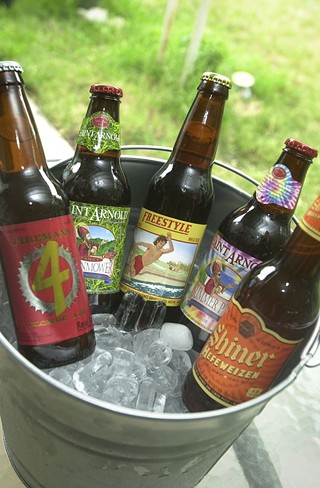 Welcome to the madness that is South by Southwest. Not only are you in the live music capital of the world, you're also in the craft beer capital of Texas – Austin has more breweries than any other city in the state. (Which is not to slight our neighbors – they might lack quantity, but San Antonio, Houston, and Dallas-Fort Worth also produce some quality suds.)

We last produced a SXSW beer guide in 2010, and since then, the Austin beer scene has exploded. If you're a beer tourist like me, you like to check out the creations local to your destination. Now, some clubs you hit this weekend will let you down, not venturing beyond light beer and maybe Guinness. But many are catching on to the craft-beer revolution. To get the flavor of Austin, look for products by these fine breweries.

Live Oak Brewing Company The elder statesman of Austin breweries, and in my opinion, the best (albeit against stiff competition). Should you pick its hefeweizen, Pilz, Big Bark Amber, or Liberation IPA? Tough call. They're all fine. Look for the distinctive tap handles made from bark-covered woodcuts.

Independence Brewing Co. If you like a good, strong imperial stout, I highly recommend the Convict Hill, and the Stash is a solid double IPA. But Freestyle Wheat might be better if the weather gets hot. It also has a spring seasonal out now called Lupulust – a "traditional Belgian-style Tripel with a hop soul," a delicious twist on an old style.

(512) Brewing Co. If you hadn't already guessed, the name comes from Austin's area code. Its Wit keeps alive the memory of the late Pierre Celis, and its IPA is worthy, but it's the Pecan Porter that put this brewery on the map. Bonus points: Find a place that serves the Pecan Porter ice-cream float.

Twisted X Brewing Company You really want a taste of Texas? Have the Fuego, a jalapeño pilsner. Trust me, it's more than a novelty. It's heavy on flavor with only a light pepper burn on the back of the throat. Twisted X's other brews are solid, too – it's the only craft brewery I know focused on Mexican-inspired beers.

Jester King Craft Brewing It hasn't been brewing long, but the Wytchmaker Rye IPA and the Black Metal Imperial Stout are world-class. Head out to its Danish Day Festival on Saturday afternoon, where Jester King will unveil its second collaboration with legendary "gypsy brewer" Mikkeler: "a strong stout brewed with chipotle peppers, smoked malt and Vietnam­ese weasel coffee." The brewery sits on a ranch in the beautiful Hill Country west of town. A great chance to see some Texas wildflowers.

Circle Brewing Company I'm normally not a big fan of ambers, dry stouts, or hefeweizens, but I really like Circle Brewing's Envy Amber, Nightlight Dry Irish Stout, and Blur Texas Hefe. Either I'm not giving these styles a fair shake or these guys have talent.

Hops & Grain Brewery, Adelbert's Brewery, and South Austin Brewing Company are all very new. I've had small samples of each, and all three are making good stuff, but I'm not sure how widely available they'll be yet.

Austin has five good ones, but you'll probably be doing most of your drinking in the Downtown area, so hit these two:

Uncle Billy's Brew & Que (1530 Barton Springs Rd.) Brewpubs serving pizza and burgers are a dime a dozen. But you're in Texas; why not have a tasty plate of brisket with a great microbrew? I particularly recommend the Agave Wit.

Lovejoy's Taproom & Brewery (604 Neches) My friends and I always gather here at 6pm Wednesday before heading out to the music, and it's a blast. It always has a couple of solid house beers among its large selection.

If you want huge selections, the Ginger Man, Opal Divine's Freehouse, Zax Restaurant & Bar, the Dog & Duck Pub, Little Woodrow's, and Whip In (Indian food!) are good bets in or near Downtown.