There's no need to sing for your supper; take a walk or a bike ride 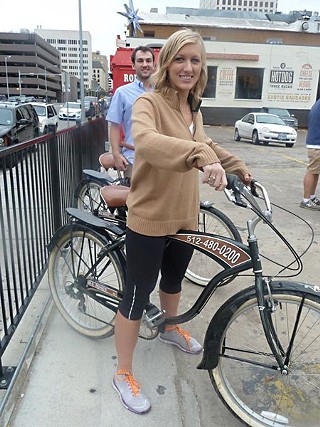 
It sprang into being, like all great ideas, on the back of a dinner receipt. Andy and Lindsey Potter had just returned from a trip to Los Angeles where they took a restaurant walking tour of the city. They began to wonder why something similar was not available in Austin. Brainstorming over beers at Doc's Motorworks, Andy scrawled a potential itinerary for a walking food tour. They called it Austin Eats Food Tours. The Potters set up a website and gave their first tour to friends in January 2011. Soon after, they began offering scheduled tours at $65 each as something of a weekend hobby. By October, Andy had quit his regular job at Dell to devote all of his energy to the growing business. Austin Eats now has three employees and offers five regularly scheduled tours: an upscale happy-hour walking tour, Saturday and Sunday morning downtown walking tours, and bicycle tours.

It was a warm, breezy Sunday afternoon in January when my husband and I met Andy at Barton Springs Bike Rental for his Downtown-South Congress bike tour. After making introductions, eight of us set off on comfortable cruisers to hit the cyclist-friendly routes through Downtown. Our first stop: Haddingtons, where we sat down to a ready table and were served an assortment of savory snacks. We chatted congenially with our companions as we sipped Moscow Mules.

As it turns out, everyone on the tour that day was an Austin resident. In fact, most of Austin Eats' business comes from locals, which surprised the Potters, who initially imagined that most of their clients would be tourists. They never dreamed there would also be a demand from locals who view food tours as an adventurous, new way to experience the city. The bike tours in particular are designed to be flexible, with stops that vary from week to week. Andy works with more than 60 restaurant and food trailer partners (with the number still growing) so he can vary his itineraries to suit any occasion.

The next stop on our bike tour was Frank. The staff there gave us the royal treatment in a private dining area, where they talked about its locavore and fair-trade food and beverage sourcing. Snacks included bread rounds topped with house-made antelope-and-rabbit sausage, huckleberry compote and spicy aioli, and pork, beef, and fennel sausage with sour cabbage slaw. The staff sent us off with a friendly wave and warm bacon chocolate chip cookies in our bellies. Then, we pedaled over to Delish to sample its fairy-tale sweet cupcakes. As a special treat, Delish's baker had also prepared bite-sized Oreo cookies, filled with devilishly good pink-and-white buttercream icing. I ate two and took two more to go. I was getting full, but we still had four more stops to hit.

Andy gained more than 30 pounds during the first year of the tours. I understand why. With several tours a week, each making between six to eight mouthwatering stops, calories start to add up. Now, Andy has a personal trainer and is careful about what he eats while leading the tours. Nonetheless, he is still a convivial host, offering insider stories and amusing tidbits about the places he visits.

Leaving Delish, we pedaled over to South Congress and locked our bikes in front of the Snack Bar to hoof it to the remaining four stops. Snack Bar owner Bethany Andrée regaled us with her endearing life story while we sampled its popular Tamago Yoko, an eggy leek-and-shrimp pancake topped with wasabi aioli and Sriracha. From there, it was over to Eric Regan's food trailer – Hey! You Gonna Eat That or What? – to try what I can only describe as one of the most decadent sandwiches I have ever eaten: a meaty Monte Christo served inside a beer-batter beignet. Luscious, velvety shrimp and grits at Woodland put all of us over the top. A unanimous favorite, there was not an empty bowl at the table, despite our swelling stomachs. An assortment of shakes from Hopdoddy was the final indulgence. I was thankful for the ride back to Barton Springs Road, without which I would have collapsed in catatonic food ecstasy.

Besides its regularly scheduled food tours, Austin Eats can customize any type of food event. It has done barbecue and food trailer tours for small groups, as well as larger events for Dell, Facebook, HomeAway, and Google. The newest tour, an East Austin bike tour, visits a rotation of eight Eastside trailers and restaurants. I can't wait to try it.