I have long admired Lidia Bastianich for her authenticity and her passionate quest to preserve and promote the cuisine of Italy, which set her apart from the myriad celebrity chefs of the minute who clog the airwaves. So when she came to Austin last fall to promote her new PBS show and book Lidia's Italy in America, I jumped at the opportunity to chat with her over lunch at Enoteca Vespaio.

Many years before becoming America's leading proponent of traditional, regional Italian cuisine, Bastianich cut her chops as sous chef for an Italian-American chef at her family's first restaurant. "For 10 years, I cooked Italian-American cuisine from the Northeast," she says, "but I realized it wasn't the cuisine that we ate at home. Then I began cooking risotto and polenta, and people noticed. There was an interest in wanting to know true Italian. So when I opened Felidia in 1981, I said, 'I'm going to cook regional Italian food because that's who I am, that's what I know, and that's what America needs.'" Indeed, America has embraced Bastianich as the ambassador of Italian cuisine through her restaurants, TV shows, and companion books. "But what I noticed in traveling was that the Italian-American cuisine that I had learned 30 years ago was alive and well across America, and that there was real pride in it; that Italian-Americans, now third- and fourth-generation, really appreciate being that connection to Italy, and the food that they know is the food of their ancestors that first came here and cooked Italian with the products that they found."

Lidia's Italy in America tells the compelling story of these immigrants and their adapted cuisine in regions all across the United States, from New York and the Eastern Seaboard to New Orleans; Kansas City, Mo.; Chicago; and California. "It follows the trail of the immigrants, where they landed, why they came, and what they cooked, and what did that need for their food generate in America? It generated a lot of businesses, a lot of restaurants." The series and book present recipes collected (and adapted) by Bastianich from some of the oldest Italian-American establishments in the country, piecing together the story of Italians in America through dishes like chicken cacciatore, Chicago-style pizza, and muffalettas, even including a page dedicated to Dallas' Mozzarella Company. "What was amazing was that Italian descendants, even if they were only a quarter Italian, they claimed it. And it was that dish that their great-grandmother made that slowly trickled down that they take so much pride in."

We had a wonderful time talking about tradition, recipes, and cooking. Her opinion of chef Ryan Sampson's food at Enoteca Vespaio? "It is very good and authentic. It takes knowledge to do all this."

Fun for the Whole Family
Traversing the Texas Book Festival 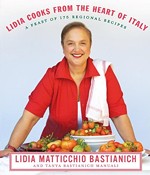 Lidia Cooks From the Heart of Italy: A Feast of 175 Regional Recipes
In her most recent, Bastianich covers regions scarcely represented in most cookbooks