From Soup to Nuts (Hold the Nuts)

It's finally winter in Austin, when we can relax and forget the brutal summer we just survived and can briefly sublimate the growing dread of the heat-blasted months ahead of us. It's a time for putting on fuzzy socks, snuggling down into the couch with a cozy blanket, and warming the belly with that most versatile of comfort foods: soup. Whether one is nursing a cold or a broken heart or just has cockles in need of warming, there is a soup in this town to meet those needs and more.

While time, space, and budgetary constraints disallow an all-inclusive study of the myriad soups on offer from Austin's restaurants and grocers, what follows is an eclectic collection of warm, creamy, spicy, chunky, soothing, healing, and surprising tonics broken down into six discrete categories: tortilla, pho, chicken, tom kha gai, vegetarian, and miscellaneous meat-based soups. The methodology for the first four categories was to assemble a number of specimens from various restaurants and conduct taste tests; the two latter categories involved an ongoing sampling as time and stomach space allowed. While your personal favorite soup is inevitably missing from this survey, please keep the pitchforks in storage and instead tell us what we missed in the comments below.

Originating in the center of Mexico, tortilla soup is pure comfort, with a base of chicken broth sometimes thickened with roasted tomatoes, seasoned with chile and onion, and garnished with tortilla strips, cheese, and avocado. While there are as many opinions on tortilla soup in Austin as there are variants on the same, two interpretations in particular stood out above the rest in our taste test. Oddly, they couldn't be more different. The tortilla soup at Manuel's is thick, spicy, creamy, and tomato rich, with toothpick-thin strips of tortilla and shredded chicken and studded with chilled chunks of avocado. Bits of ancho chile lurk within, which are used in the roux that flavors the soup. On the other end of the spectrum from this big, bold bowl is the delicate tortilla soup at Vivo. Ever-so-thin slivers of jalapeños dance in the light, flavorful broth alongside smidgens of tomato and celery. While the garnish – tortilla strips, white cheese, and avocado – is standard, the tender and intensely flavorful chicken is the star of the show.

We anticipate that this will be the most controversial category of this survey, considering the myriad excellent pho restaurants in town, despite the relative newness of this particular dish. This Vietnamese soup is a 20th century innovation, emerging in the northern part of the country near the 1920s and migrating south in the 1960s or so. The southern version, which is sweeter and incorporates more fresh herbs and bean sprouts, is the kind most pho-loving Austinites are familiar with. The hallmarks of a good pho are a dark, fragrant oxtail and beef-bones broth flavored with cinnamon, ginger, onion, and other spices, as well as various cuts of beef, from brisket to tendon to meatballs. Pho comes with a plate of greenery, including fresh basil, bean sprouts, fresh sliced jalapeños, lime, and cilantro; diners can add as much or as little to the bowl as they like.

While we tasted soups from well-regarded outlets like Pho Danh, Pho Hoang, Pho Tháison, and Kim Phung, strangely, there was no one pho from among our sample set that met the criteria for both broth and beef. There were two versions that rated the highest in the individual components. Where Tân My had tender, flavorful brisket, the broth was weak and slightly sweet. Conversely, newcomer PhoNatic, run by the owners of Pho Saigon, boasts a delicious, fragrant, citrusy broth with thinly sliced, slightly tough brisket and red onions.

Ah, chicken soup. It's allegedly good for the soul and also functions as psychosomatic penicillin for those under-the-weather days. Chicken soup is beautifully versatile, which is perfect for a city collectively suffering from cedar fever. For a creative twist on traditional chicken noodle soup, Tino's Greek Cafe's lemon-chicken soup is a sure thing. The lemony broth is thick, vitamin C practically emanating from the steam, with a generous helping of soft orzo accentuated with tiny bits of chicken and carrot. If gluten is an issue, NeWorlDeli has a poblano-chicken soup that is unabashedly homemade, all chunky chicken and spicy chiles, just the antidote for congested sinuses, and far less dangerous (and infinitely more delicious) than a neti pot. A must-have for those rare, bitter-cold nights, though, is the chicken-tamale chowder from Central Market. This is rich, substantial stuff, with a masa-thickened chicken stock base with chiles, shredded chicken, and subtle spicing. Served piping hot with a soft piece of bread to sop up the dregs, this is pure comfort in a bowl.

Chances are, most diners have had a small cup of this coconut-milk-based Thai soup as a starter with their lunch special of pad thai or pad see ew. A staple of Thai cuisine, exceptional tom kha is a balanced flavor combination of coconut milk, lemongrass, chicken, and galangal, a citrusy cousin to ginger. Most of the versions of tom kha available in town are tom kha het, which includes button or straw mushrooms in addition to the chicken. While the tom kha at Thai Kitchen is a perennial favorite in this house, it's a bit out of balance: tart and not too coconutty, with galangal as the dominant flavor. It does get a bit of a bump for the occasional presence of straw mushrooms instead of button, however. The tom kha at Pad Thai, on the other hand, is swoonworthy, with a perfectly balanced and deeply soothing broth that's not too sweet or too tangy. The broth at Madam Mam's is fuller-bodied than the others we tried – perhaps it uses a coconut milk with a higher fat content? – and is also nicely balanced.

Sometimes chicken or beef soups aren't an option, and that's OK because Austin is nothing if not vegetarian-friendly, especially when it comes to soup. That said, if Austin vegetarians eat nothing else this winter, they must have the lubiya from FoodHeads. Lubiya is a Middle Eastern black-eyed pea soup, and the version at FoodHeads is peppery, with hints of lemon and chunks of tomato. It's extremely delicious, especially piping hot and freshly ladled for consumption on premises. Another bean soup, this one vegan, can be found at Cazamance Cafe. The spicy West African black-bean-cumin soup is scented with clove and incorporates large chunks of carrot and potato for a very hearty and filling dish.

For those who aren't worried about maintaining a perfectly virtuous diet, the broccoli-beer-cheese soup at the new Eastside bar Gourmands, served in a heartbreakingly fresh bread bowl, is a splurge. The not-too-thick cheese buoys generous florets of broccoli; it's particularly pleasurable when pieces of bread break off from inside the bread bowl, thickening the soup nicely and adding some heft to each bite. Paired with a half Cleopatra vegetarian sandwich on a soft, soft hoagie, the combination makes for a satisfying if carbohydrate-heavy lunch. For an old-school throwback to simpler times, a bowl of the smoky roasted tomato bisque from Central Market is the perfect complement to a grilled-cheese sandwich and some carrot sticks.

On the flip side, if lentil soup and its ilk are nothing but bitter reminders of the years spent living on a shoestring budget in some run-down hippie co-op, there are surprisingly creative and amazingly flavorful meat-centric soups around town that should be on any omnivore's must-try list. First and foremost is the pepperoni soup from Second Bar + Kitchen. This is a full-bodied, chunky tomato soup with notes of oregano, studded generously with small hunks of pepperoni. Topped with a liberal portion of broiled mozzarella, this soup is served in a personal-sized earthenware crock with crusty breadsticks on the side for those who want all the pleasure of a cheesy, meaty pizza without the heavy carbohydrate bomb that goes along with it. I highly recommend enjoying a serving on the patio over lunch with friends who love people-watching almost as much as they love food.

On a more traditional note, the husband-and-wife team at the newly opened Soup Coup mines their families' prized soup recipes and peddles from a tiny trailer on East Seventh Street. The Guinness-beef stew, while suffering from undercooked potatoes and carrots on the day of our visit, has the potential to seep warmth into the coldest reaches of a body's chilled innards; the broth is especially potent when absorbed by a piece of crusty bread slathered in salty butter. The full monty of soup-borne meats, though, can be found at Mandola's Italian Market in the form of the minestra maritata, or Italian wedding soup. Chock-full of chicken, pork, prosciutto, pancetta, and wee meatballs and accentuated by mixed greens and Parmigiano, this bowl offers a bit of a spicy kick while also providing a serving from most of the major food groups (a side of oven-fresh focaccia will round things out in that regard). The green-tinged broth alone will make diners feel like they're doing their bodies a favor.

While a soup-heavy diet may conjure up images of convalescence and being generally housebound, there's a surprising amount of gustatory pleasure to be had in something as simple as a steaming bowl of broth, vegetables, and meat. And even though Austin's winters are short indeed, there is enough cold weather to justify a thorough exploration of the city's rich soup landscape; the undertaking may prove nourishing for more than just the body.

Madam Mam's: 2514 Guadalupe, 2700 W. Anderson (Note: The name of the current Westgate location has been changed to Sap's.)

My Family Table: A Passionate Plea for Home Cooking
A collection of cookbook gift ideas for 2011 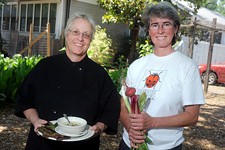 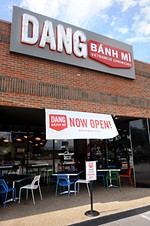 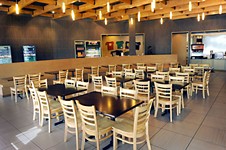 PhoNatic
This fast-casual Vietnamese eatery is the real deal 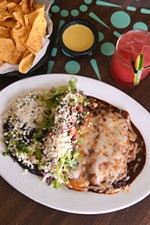