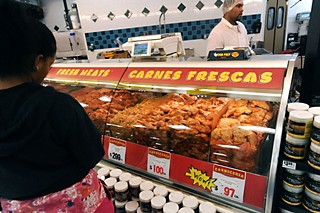 
After a couple of neighborhood successes in Houston, H-E-B has brought its Hispanic-influenced Mi Tienda ("my store") concept to the Austin market. When it came time to refresh the 30-year-old store at the corner of Rundberg Lane and Lamar Boulevard, the company evaluated the area demographics followed by customer surveys and decided the time was right for a store designed to appeal to a large Hispanic immigrant population. The remodel brought with it 6,000 square feet of additional retail space and 40 new employees. The recent debut with food tastings and giveaways received an enthusiastic reception from the neighborhood.

Shoppers entering the store's south doors discover a greatly expanded produce department with a dizzying selection of freshly cut fruits and vegetables – a couple of employees were busy cutting the spines off of fresh nopales (cactus pads) the day we visited. Facing the produce department is the in-store masa factory and tortilla press where packages of fresh, white-corn masa sit alongside some flavored with strawberry, pineapple, and chile. The in-store tortilla machines put out a ready supply of white-corn tortillas, as well as flour. The corn tortillas became fairly soft and pliable when heated on the comal, but the Mi Tienda flour tortillas were the true find. Especially soft and thin, with just the right shortening-to-flour ratio, they made a good base for breakfast tacos and became delightfully crisp, delicate buñuelos when deep-friend in canola oil and dusted with cinnamon sugar.

Around the corner from the tortilla line is the in-store bakery with an abundance of brightly colored Mexican pastries, dainty Mexican wedding cookies, tables piled high with packaged rosca de reyes cakes for celebrating Epiphany, elaborately decorated cakes for special occasions, and three flavors of tres leches cakes – plain, dulce de leche, and chocolate. Along the back wall of the store, a deli offers several flavors of fresh salsas and cremas, prepared foods such as rotisserie chickens, and an extensive selection of packaged meats and cheeses imported from Mexico. The meat market here is an authentic carnicería (Mexican butcher shop) featuring chorizos and several cuts of seasoned, fresh meats prepared daily in the store. Store aisles are stocked with familiar American-made products, as well as brands imported from Mexico and other Hispanic countries. Our first visit left us hungry for more.